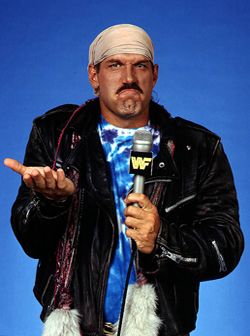 Jesse Ventura Discusses The Release Of His New Book “American Conspiracies,” The Conspiracy Of The WWE (And Vince McMahon) vs. “The Macho Man” Randy Savage, The Conspiracy of How McMahon Uses The Term “Independent Contractor” In Today’s Industry, Bob Uecker’s Induction Into The WWE Hall Of Fame, & The Projected Launch Date For Season II Of TruTV’s “Conspiracy Theory,”

Courtesy: www.MondayNightMayhem.com
WWE Hall Of Famer, Jesse Ventura, was one of the special guests on this week’s live edition (03/22/09) of Monday Night Mayhem (presented by ReelWrestling.com), hosted by The Big Mosh, Blade, & “The Chairman Of The Board” Todd Vincent. You can feel The Mayhem live & in streaming audio every Monday night (at 7PM ET/6PM CT), exclusively on The Monday Night Mayhem Radio Network (www.MondayNightMayhem.com).

Ventura joined The Big Mosh, Blade, & “The Chairman Of The Board” Todd Vincent in his return to “Your Home Of Wrestling Radio” (to preview the release of his new book, “American Conspiracies,” which currently stands at #6 on the New York Times best-sellers list), which is now available in Windows Streaming Media or via Monday Night Mayhem’s official Podcast on ITunes:

Interview highlights courtesy of The Mayhem’s official correspondent, Paterson From New Jersey:
What is different about his new book (“American Conspiracies”) from his previous releases & his current media tour, as opposed to ptevious interactions with the media over the years: “There’s a real distance between the public & the media today. The public doesn’t buy into the modern day media. I think they feel they are dishonest, and they’re being controlled & manipulated to carry forth the status quo of what’s being said out there.”

His thoughts on the conspiracy of why the WWE & Vince McMahon being against “The Macho Man” Randy Savage, especially coming off the recent reports of the company not acknowledging the passing of Randy’s father (Angelo Poffo): “No. I now nothing about it. When I left wrestling, Randy was still there. I left in 1990, and at the time, Randy was still on top of his game. I’ll add this: The greatest match that I ever saw and have ever seen in the world of pro wrestling was WrestleMania III/Randy Savage vs. Ricky “The Dragon” Steamboat. That being said, I have no knowledge. When I came back to do RAW this year, I had to watch the week before just to find out who was there. I don’t have any idea who the wrestlers are anymore, I don’t watch it, and I’m not involved in it at all. Other than a occasional appearance, that was a cold thing to promote my television show. Had my television not been part of it, I wouldn’t have been there. I work with Vince on business things like that, but I hate to break your hearts guys, but I don’t watch it.”

The heat he has had with Vince McMahon (including his recent trouble with World Wrestling Entertainment after guest-hosting Monday Night RAW) & the conspiracy of how the WWE uses the term “independent contractor” in today’s industry: “Obviously this happened after I left, and I would have no knowledge whatsoever on why…I mean I could understand having a beef with Vince. After all, I am the only person I think, to beat him in Federal Court. So I have my retirement from wrestling. I won in Federal Court, so I get quarterly checks from the WWE, and I call it my wrestling retirement money. But I got in trouble because after I went on RAW, I went on other shows and spoke about how wrestling in still in the dark ages. They still have no benefits, they’re still called “independent contractors,” which I find laughable. You wanna talk conspiracy? How is it that McMahon is able to get away with calling you an “independent contractor” when you’re signed to an exclusive contract. You can’t work for anyone else, and so he doesn’t have to pay Social Security. You gotta pay self-employment tax, which is 15%. There’s a good conspiracy for you.”

The reaction of the wrestling community towards Jesse & “American Conspiracies,” considering that the vast majority of the media sees wrestling fans as not smart: “I think I’ve proven beyond any reasonable doubt wrestling & wrestling fans are not stupid. The majority of wrestlers today are college-educated to the best of my knowledge. It’s a sport of entertainment that has a huge following, and they should be loyal, and they should not have to hide the fact that they watch wrestling because it’s tremendous. I like to refer to it as ballet with violence.”

His thoughts on being inducted into the WWE Hall Of Fame after his battles with Vince McMahon & the long-standing issues between Bruno Sammartino & McMahon on the topic of Bruno not being in the WWE HOF to this day: “To me, you can’t argue that the WWE is wrestling. As a performer, it’s supposed to be an honor to go into what you focused on at the prime of your life & were successful at and to be inducted into a Hall Of Fame. It’s not about money to me. When I did it, I viewed it has an honor to the accomplishments I gave to a business I loved for a period of my life. There’s always been the battle between Bruno (Samartino) & Vince (McMahon). How can Bruno not be in the Hall Of Fame? I realize Bruno’s position, and he’s entitled to it, and I respect him for it that he won’t. But in a way, don’t you kinda look to you fans too to accept it? No one has had more run-ins with Vince than me. I didn’t have any problem going into the Hall Of Fame.”

More is contained in Jesse’s third-ever appearance on The Monday Night Mayhem Radio Network, including the former Governor of Minnesota’s uncensored thoughts on some of the conspiracies he discussed in both his new book “American Conspiracies” & his television show (“Conspiracy Theory”), the projected launch date for Season II of “Conspiracy Theory,” the most underreported & important conspiracies over the years, along with his comments on Bob Uecker being inducted into this year’s class of the WWE Hall Of Fame. Mayhem Nation, be sure to check out the newest inductee into the Monday Night Mayhem Hall Of Fame in his return to “Your Home Of Wrestling Radio” just in time for WrestleMania XXVI, and get ready to have your mind blown with the release of “American Conspiracies.”

“Your Home Of Wrestling Radio” is officially presented by ReelWrestling.com (http://www.ReelWrestling.com), where your favorite Superstars are just one click away! The award-winning Monday Night Mayhem (voted on by you, the fans as the “Show Of The Year” in the 2009 & 2010 Wrestling Radio Awards) is also sponsored by: Sizzlin’ Sauces (the official hot sauce of The Mayhem: http://www.SizzlinSauces.com), & TicketRelief.com (the official online traffic school of The Mayhem: http://www.TicketRelief.com), B. Brown Video (where you can relive the moments & memories of professional wrestling’s rare & vintage moments: http://www.BBrownVideo.com), & Kayfabe Commentaries (featuring the release of the all-new “YouShoot: Jim Cornette” DVD: http://www.KayfabeCommentaries.com).