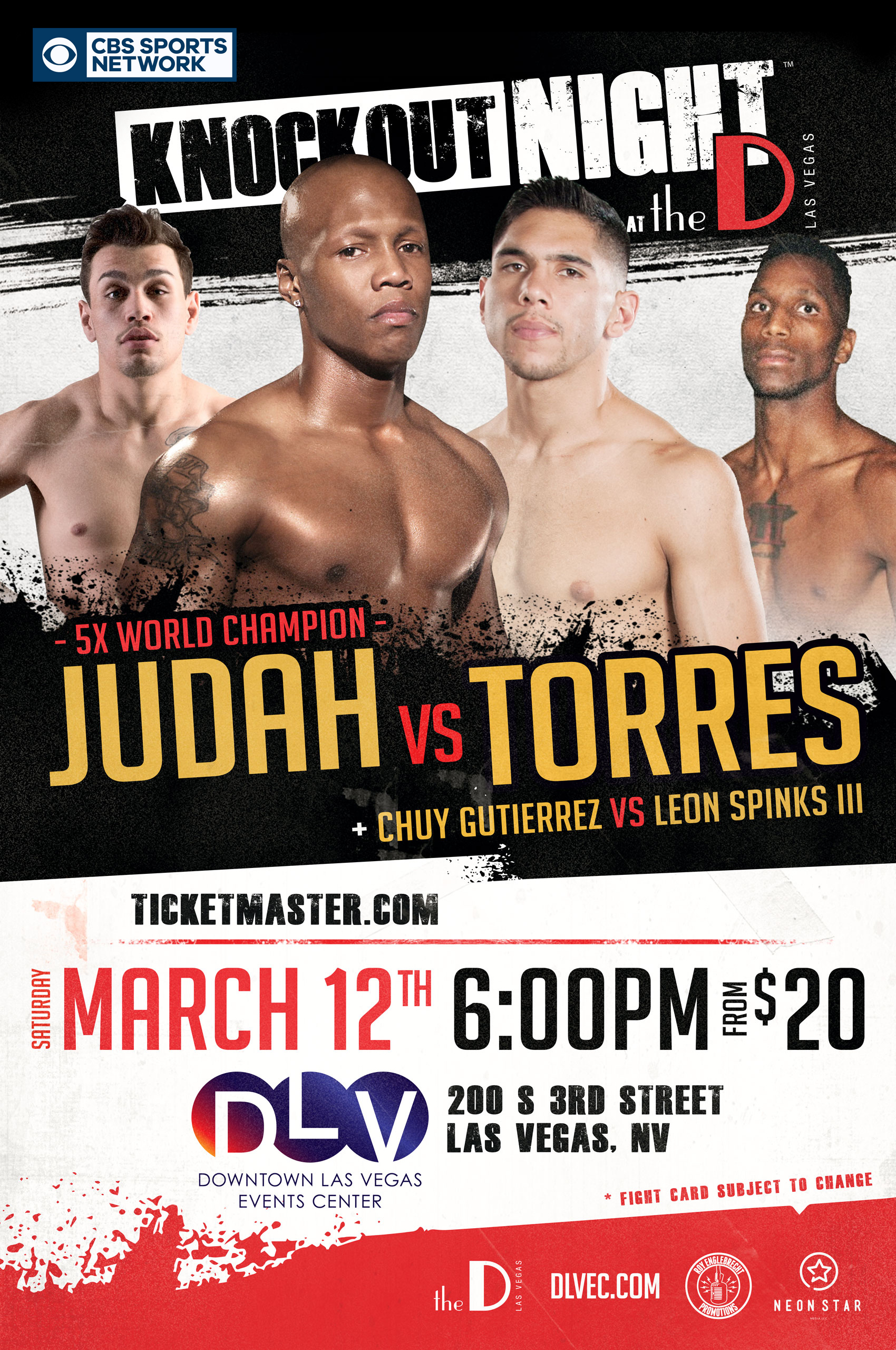 It has also been announced that the “Knockout Night at the D” broadcast team will feature a pair of Hall-of-Fame announcers, color commentator Al Bernstein and Jim “JR” Ross will handle blow-by-blow responsibilities, as well as former world featherweight champion Kevin “Flushing Flash” Kelley, who will conduct post fight and celebrity interviews.

The “Knockout Night at the D” series, created by the D Las Vegas and DLVC, along with Neon Star Media and Roy Englebrecht Promotions, will be held at the DLVEC open air venue located adjacent to the D Las Vegas.  The inaugural event Mar. 12th, however, will take place inside the DLVEC’s 20,000-square-foot tent.

Eight “Knockout Night at the D” events are planned in 2016.  There are three other series broadcast dates – April 16, May 13 and June 10 (subject to normal Nevada Commission approval) – with other dates to be determined in September, October, November and December.

“It has been our vision to bring outdoor boxing back to the city, so it excites us to see this dream of ours come to life at the Downtown Las Vegas Events Center,” Derek Stevens, CEO of the D Las Vegas and DLVEC said. “We look forward to partnering with Neon Star Productions to present a series of incredible match-ups that will be talked about for years to come.”

Bernstein is arguably the preeminent boxing announcer in the world.  In 1980, Bernstein joined ESPN as its boxing analyst.  The 1988 Sam Taub Award winner for excellence in boxing broadcasting journalism, Bernstein served as boxing analyst for NBC’s coverage of the 1992 and 1996 Olympics.  A 2012 International Boxing Hall of Fame inductee, Bernstein has been boxing analyst for Showtime Championship Boxing since 2003, as well as the main commentator the past four years for Channel 5, a terrestrial network in the United Kingdom.

“I am extremely happy to be a part of the ‘Knockout Night at the D’ series,” Bernstein said. “The venue is great, the event creates a lot of excitement in Downtown Las Vegas, and CBS Sports Network viewers will see excellent boxing on our telecasts. The operative word here is fun. I’m looking forward to it.”

The wildly popular Ross, who was the voice of the WWE, was inducted into the WWE Hall of Fame in 2007.  Although he is best known for his work in wrestling, Ross is an experienced sports commentator who has called professional boxing and mixed material arts events. He has also developed his own brand of barbeque sauces and cookbooks.

“I am beyond excited to have this opportunity to broadcast big time, world-class boxing from the fight capital of the world, Las Vegas,” Ross remarked. “Working with Boxing Hall of Famer Al Bernstein, the best analyst in the game, and with the ’Flushing Flash’, Kevin Kelly, equates to a unique broadcasting trifecta. Ring the bell…it’s Slobber Knocker time!”

Kelley (60-10-2, 39 KOs) captured the World Boxing Council featherweight championship December 4, 1993 in Reno, by way of a unanimous 12-round decision, and he successfully defended his title twice against Jesse Benavidas and Jose Vida Ramos.  Kelley, who lives in Las Vegas, is an experienced boxing analyst.

“I would like to thank the team of CBS Sports Net work, the D Hotel, Al Bernstein and Jim Ross for this life changing moment,” Kelley commented. “With my hands-on fighting experience and their knowledge of boxing, we come together perfect like a hand in glove.”

All fights and fighters are subject to change.

The “Knockout at the D” series was developed in partnership with DLVEC and Neon Star Media.

CBS Sports Network is available across the country through local cable, video and telco providers and via satellite on DirecTV Channel 221 and Dish Network Channel 158. For more information, including a full programming schedule and how to get CBS Sports Network, go to www.cbssportsnetwork.com.