John Cena and Fox team up for ‘American Grit’ 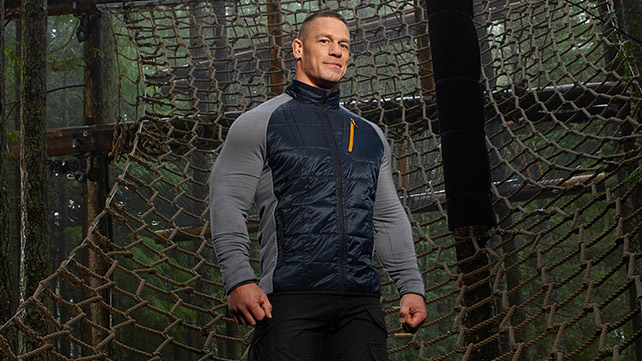 WWE Superstar John Cena is joining forces with Fox and Leftfield Pictures for a brand-new and unique 10-episode reality competition. “American Grit’ will split 16 of the country’s toughest men and women into four teams as they work together to face a variety of military-grade and survival-themed challenges.

Cena has recruited an elite group of mentors from the nation’s most exclusive military units that will push these civilians beyond their limits. These mentors, known as “The Cadre,” include Rorke Denver, Noah Galloway, Tawanda “Tee” Hanible and Nick “The Reaper” Irving. These real-life heroes represent diverse backgrounds and top branches of the U.S. Armed Forces and will impart their first-hand knowledge and experiences to enable their teams to leave no one behind.

At the end of each episode, teams will have to overcome “The Circus” – a punishing, endurance-based obstacle course designed to break the weakest competitors. It is the ultimate test of strength, stamina, the human spirit and teamwork, because one team has the chance to win a $1 million dollar prize.

“The U.S Military is the epitome of resolve and dedication, which is why I am so excited to be a part of ‘American Grit’,” said Cena. “This show will not only be a challenging and fierce competition, but it will give viewers a glimpse into the perseverance and training of the men and women of the Armed Forces.”

WWE Tribute to the Troops comes to Jacksonville

“’American Grit’ is a bold, aspirational competition series that aligns with the spirit of the Fox unscripted brand,” said David Madden, President, Entertainment, Fox Broadcasting Company. “The team at Leftfield and the incredible John Cena have created a series built on the pillars of determination, dedication and strength that we know will resonate with our audience. John is not only a phenomenal athlete but a motivational force, who inspires fans around the world, and we are thrilled he is leading the charge.”

“We are excited to be working with Fox and John Cena on a show that highlights the American spirit of competition, which is epitomized by Cena,” said executive producer and CEO, Leftfield Entertainment, Brent Montgomery. “With John as their inspiration, our contestants will show viewers what happens when you swing for the fences with focus, commitment and teamwork.”