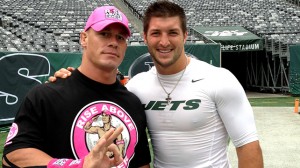 WWE Superstar John Cena hit the field Sunday at MetLife Stadium — home of WrestleMania 29 — where he helped lead the New York Jets to a 39-5 victory over the Indianapolis Colts as Honorary Team Captain.

The Cenation leader stood alongside New York Jets coach Rex Ryan, quarterbacks Mark Sanchez and Tim Tebow as well as the rest of Gang Green as the Jets brought their season record to 3-3.

Cena is still donning the Kinesio Tape to help him recover from his elbow surgery, but the Cenation leader was ready for action on game day at MetLife Stadium — and is no doubt looking forward to returning there on April 7, 2013 for The Showcase of the Immortals.