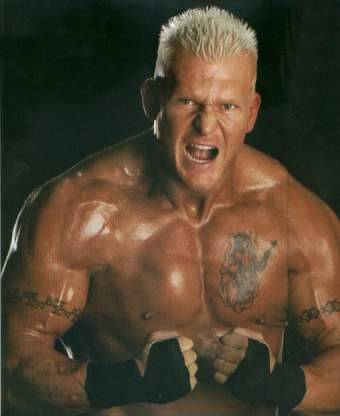 Jon Heidenreich appeared on the August 2nd Edition of The Shoot: Talk on Professional Wrestling. The interview starts off at about the 33 minute mark of the show. He spoke on a variety of topics including Road Warrior Animal, Vince McMahon, Bob Holly, and more. Here’s a recap:

Hosts Gary Cantrell and John Krauser welcome Jon Heidenreich and fellow AWF wrestler Mr. Wrestling 3 to the show. They first ask him about the origin of “Little Johnny”, Heidenreich says it was based off of his “inner-child”. He described it as the “voice” inside of his head that wanted to seek revenge on all of the people who made fun of him in his childhood. He said the WWE tried to turn it into something sexual and “f*cked it up like they do every storyline”. He said he wanted to reach people with it as he believed a lot of people could relate to being teased as a child.

Heidenreich then responds to comments made by Road Warrior Animal on last week’s episode of The Shoot. He says first and foremost he has nothing but the utmost respect for Animal, Hawk, and The Legion of Doom for what they contributed to the business and says his beef lies on a personal level with Joe Laurinaitis not Animal the wrestler. He goes on to say that the first week on the road with Animal, he was asked if he could loan five thousand dollars to him. At the time, he was new to the business and Animal came off like he really needed the money. Heidenreich says he loaned it to him out of the kindness of his heart. It wasn’t until the Hurricane hit when he lost his home and his family was living in a hotel that he needed the money and had a hard time getting it back from Animal. He said tension began to build on the road as he was trying to get his money back. He said Animal wanted to keep it between the two of them, but then began painting the picture as if Heidenreich was disrespecting him. He says that he never got $600 of it back. He said it was very bad towards the end; he didn’t want to ride with Animal anymore. Lots of arguing and bickering ensued. He made the claim that Animal said “You owe me the $600, for inconveniencing me on the road”

His take on the run with LOD:
“I thought it was the greatest opportunity of my career behind working for The Undertaker. I thought it was going to be the greatest thing to ever happen to me; little did I know it would lead to my demise and release “He believes Animal was going back to the office and making up/embellishing stories about him such as he was unreliable, had drug problems, and couldn’t handle the schedule. He believes this lead to his eventual release.
Heidenreich on his release:
“When they released me they said I wasn’t reliable, which is total f*cking bullsh*t because I went through a hurricane and didn’t miss one f*cking show. I missed one show when I was bleeding out of my ear in an emergency room on morphine, I missed a house show and they released me one week later, after I had hypertensive heart disease diagnosed from wrestling, from the pressure
they put you under, from the pressure and the things you do because if you don’t stay healthy and work hurt and take whatever you have to take they will fire you because I was fired twice for being hurt” Jon said he never took pain pills or steroids till he got into professional wrestling, then he was exposed to everything: cocaine, marijuana, pain pills, soma, xanax, steroids, everything”*

He then goes on to speak about the pressure WWE puts on “the boys”. He said he believes Vince gets off of screwing guy’s lives over, and messing with their relationships. He said it was a blessing to be a part of WWE but it was also detrimental. He also slams the internet reports stating that he wasn’t reliable, that he had drug problems and couldn’t keep up with the road schedule claiming those reports were total bullsh*t.
He’s then asked if he’d ever consider going to TNA. He says that he had one meeting with Dutch Mantel in Puerto Rico and basically introduced himself. He says nothing has materialized from it yet but would be more than happy to get the opportunity to get a chance down there. He says currently he’s working Indy dates any and every chance he
gets.

He goes back onto WWE and says “the boys are not treated like human beings, more like cattle if not worse”. He says the WWE has been letting sh*t slide for years.

Jon talks about the WWE insurance policy when you get hurt that they are supposed to pay for your in ring injuries and tests. Jon said when he had all his heart tests, ER bill when he had the bleeding ear and when he blew his quad on Raw and he had to go to Tulane to rehab that they didn’t’ pay any of those bills and it was all sent to Jon and put on his credit.Â  Jon said they don’t expect you to go to the doctor.Â  They want you to work hurt and not get treatment.Â  Jon said Vince is a evil dictator.

Jon talks about The AWF. He said the guy who runs the company treats him well and he gets paid good money. Alabama, Mississippi, Texas, Louisiana and Florida are real awesome places to wrestle.Â  He said its old school wrestling where people still believe.Â  Jon said he’ll continue to wrestle on the indys as long as he can because he enjoys it.

Mr. Wrestling 3 and Heidenreich then tell a story of Animal holding up a Christian Wrestling promotion for more money. They said Animal had agreed to a price with the promoter and then before the last intermission he told the promoter if he doesn’t get another 1,000 dollars then he’s not going out there to work.Â

Mr. Wrestling 3 and Heidenreich said No Comment in Regards to the GSI YouTube videos that are going around the net.

Heidenreich talks about Bob Holly. Jon said Bob is a bitter guy. He calls Bob a stooge and the reason he’s got a job is because he goes and tells on all the boys. He said Bob goes around and asks for pain pills from the boys all day long. He said the reason he’s there is that he’s done some sick sh*t to get his job.Â  He said Bob was telling people that Jon was on Crystal Meth trying to get him fired. Jon said when Brock broke Bob’s neck it wasn’t an accident, it was intentional. Jon calls Bob a Bully and talks about the Rene Dupree incident. He said *”I seen him kick Rene Dupree’s face in, because Rene was to afraid to fend for himself, he wouldn’t do that to me because he knows I’d bash his f*cking head in”* Jon says that when he was injured he would give Bob pain pills when Bob broke his neck to help him out and Bob would turn around and tell the office that Jon had drug problems. Jon said he would do that to all the boys.

Jon closes out the interview thanking the fans for supporting him.

This powerful, emotional interview runs about 60 minutes as Heidenreich also discusses Triple H,Â  John Cena, Unionizing Wrestling and much more!! The Interview is available for Streaming/Downloading at the following link:

for more info on this interview and others to come please visit: