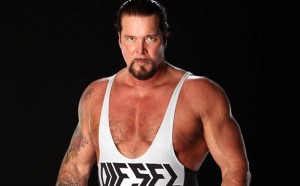 KEVIN NASH REFLECTS ON THE TITLE RUN OF NO CONFIDENCE

There was no more important component of yesteryear’s wrestling product than a federation’s heavyweight title belt.  The man given that 10 pounds of metal and leather was also implicitly given the responsibility of headlining the company’s major events.  In return, the federation would by putting this champion over, strengthening him in the eyes of fans, building a superhero.  Unless you are Kevin Nash in the WWE in 1995, that is.

In his edition of “Timeline: The History of WWE – 1995”, released today on DVD at http://www.kayfabecommentaries.com/, Kevin Nash outlines a title run rife with bizarre decisions on the part of WWE decision makers.  These decisions seemed almost an intentional effort to weaken Nash, not commit to his push, and ultimately, keep him in line.  Strange?  Indeed.  Among the odd booking decisions outlined in the DVD are Nash not headlining Wrestlemania that year as champion, and also not appearing in the Midway Wrestlemania video game released that year.  The opponents he was given right out of the gate to build him as champion included Bob Backlund and Mabel.

“You’re our guy…but your pitch count is 30,” Nash said in describing the company’s attitude toward him once giving him the strap.  It was this company’s attitude towards its stars that led to the formation of a united band of stars…a kliq, if you will.  Nash chroicnles the formation of that group, as well as the various ways they sought to exercise a very real level of control of the WWE, and the casualties that befell those in their way.

This edition of the popular, historical DVD series went on sale today at http://www.kayfabecommentaries.com/.