Kenny Omega: How Can He Be So Talented Yet So… Bad?
The Stardy Report #2 (written by Stardy for OWW Genesis) 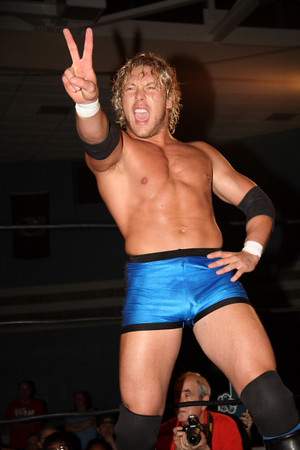 First off, just bring this up first. The title refers to his time in ROH. Read through the whole report before you judge him though, because honestly, if you have only seen him in ROH, then you may be surprised at some of the stuff you will see in here.

Kenny Omega made his debut in 2000, believe it or not, as a Hawaiian Surfer, but that quickly evolved into the Kenny Omega of today. Hailing from Transcona, he’s arguebly one of the best Canadian Talents currently out there, and within a few years of his debut he won himself Match Of The Year Awards for some local feds, including one of the best matches of 2002 against Mentallo (His trainer) at a PCW Show. On the note of PCW, he’s a four time Heavyweight Champion of the company (And the current), and won the 2005 and 2007 Premier Cup, as well as PCW Tag Champion, to go along with his Match Of The Year award. He has also held titles all across the globe now, including the JAPW Heavyweight Title, KO-D Tag Champion with Kota Ibushi, NWA World Junior Heavyweight Champion, CWF Heavyweight Champion, NWA Canada X Champion and a three time MSW Canadian Unified Junior Heavyweight Champion, among many other titles, and with it, became one of the most in demand wrestlers in the globe due to his talent and gimmick, leading him to appearing in PWG, DDT, ROH and more companies.

So why is he hated in ROH? Because he is bland, thats why. He still shows his talent, yet he’s done something, and whatever it is, it’s not good. When you compare him between him in ROH and DDT Omega, or even in PWG as a member of Men Of Low Moral Fiber with Chuck Taylor, you think you are watching a different guy, as the PWG Omega is by far more entertaining, the DDT Omega showcases some fine matches, but ROH Omega gets beat up and has a Hadouken, and has two pinfall victories of Austin Aries, and that’s basically his whole gimmick. Let me rundown his career in both of them… in PWG, he made his debut at the Battle Of Los Angeles 2008, where, after impressing officials, he was brought back and quickly made a roster member as a joke badass, and quickly started a feud with El Generico after Generico managed to pin him and Chuck Taylor, leading to the two forming Men Of Low Moral Fiber, and attacking El Generico and Rick Knox (The Beloved Referee!) whenever they could after paying off Excalibur, however it was Generico’s former team mate Human Tornado (The two former Two Skinny Black Guys) and Colt Cabana to save him. The feud came to an end when Men Of Low Moral Fiber defeated Two Skinny Black Guys for a Tag Title Shot against The Young Bucks, and after what is being called a really, really awesome match (Not out on DVD, so I can’t comment), the Bucks defeated them, and that’s a quick rundown of his PWG Career. Now, lets look at ROH. Debut when ROH came to Canada in July last year, losing to Delirious on his debut and Silas Young at New Horizon the next night, and after a losing streak, got his first victories just going into the New Year, and then managed to defeat most of ROH’s Uppercarders, including current champion Austin Aries twice. And he’s been doing nothing since then, bar showing up to wrestle without doing much else, and it’s led to him becoming so boring, and if you hear all the good things said about him and only go from his ROH Career… you’ll think he is overrated. Easily.

So… why is his career in ROH terrible? I don’t really know, he’s just so… stale and bland, and just there. Like Andy Ridge, Alex Payne and two more people who are basically in the same spot as Kenny Omega, Eddie Kingston and Sami Callihan. Maybe if he cut a promo or two from time to time so I could actually care about him, or turned heel so I don’t have to watch him be a plucky babyface, or even just remove the Hadouken from his moveset, all three may work, who knows, maybe even bring Chuck Taylor in and have the two form Men Of Low Moral Fiber in ROH, it could work wonders.

I dunno really, but bottom line: Omega has proved he has the talent, charisma and the ability to go long matches (He went an hour in DDT once), yet for some reason or another, his days in ROH have sucked, and will be numbered if he doesn’t buck up soon, in a guess, since ROH could use the money they spend flying him in on some more local talent or even bringing in other Canadian Talents in on a regular basis. And this is coming from a Omega Mark.