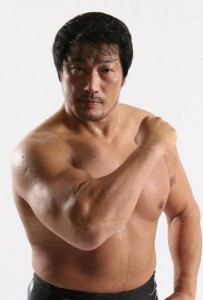 Kenta Kobashi, one of the greatest pro wrestlers of all-time, just  announced his retirement on Sunday’s Pro Wrestling NOAH show at Sumo  Hall in Tokyo. Kobashi said that he would like to wrestle one more  match, and claimed he was not forced to retire.

*Kenta Kobashi came out to address the rumors surrounding  him this week and the future of his career. He says the Tokyo Sports  coverage of him was negative, but at the same time the injuries to his  neck and left arm are a major setback. With his own judgement, Kobashi  said that recovery is impossible despite any surgery he may undergo…and  he has indeed DECIDED TO RETIRE.

*Kobashi said that wrestling is his life, and he thanked all the fans  who have supported him over the years. Then he said he plans to stand in  the ring once again if he can reach the form to do so.

*There was no clear indication if this will be an actual match, or if  his retirement will center around the show. I guess it all depends on  how things go within the next month or so.

Kobashi will hold his retirement match on February 26, which also  marks his 25th Anniversary as a Pro Wrestler. Kobashi said he would like  to compete at least 1 more time, if nothing else.

This thread is located at http://forums.onlineworldofwrestling.com/showthread.php/20663-Kenta-Kobashi-Announces-Retirement