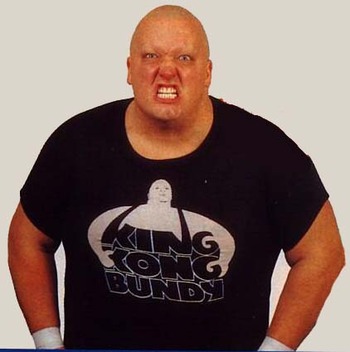 The Pro Wrestling Report is pleased to announce the creation of the PWR Hall of Fame with an induction ceremony to be held in New York City on April 5, 2013.

Our first inductee will be King Kong Bundy – a man who many say should have been inducted into the Hall of Fame many years ago.  Bundy has achieved so much in the wrestling business including headlining “Wrestlemania 2” with Hulk Hogan and appearing on the hit TV show “Married with Children” in the 1980’s.  Bundy is referred to as one of the best “big men” to ever wrestle.

The Ceremony will be hosted by PWR Host Dameon Nelson (twitter: @dameonnelson) and will be open to the public.  The Hall of Fame Ceremony will be the kickoff to PWR Weekend in New York where the Shenanigans in the Concrete Jungle Party will occur the following evening also at Hotel Pennsylvania.  The Party will be hosted by Kevin Nash and will feature appearances by several other major names in Pro Wrestling!  Tickets for the party are available now at www.pwrshow.com as well.

More inductees will be announced in the coming weeks along with the names of the stars who will be inducting the 2013 class.

What: Hall of Fame Ceremony

Passes are available to members of the media, please contact us via email at [email protected] for consideration.

“The American Dream” Dusty Rhodes and “The Million Dollar Man” Ted Dibiase will be appearing for a special Meet and Greet session during the Milwaukee Admirals Game at the BMO Harris Bradley Center.  Tickets are available now at www.ticketmaster.com

Tales from the Ring – The Wrestling Summit (February 22nd)

Jim Ross, “Mean” Gene Okerlund and Jerry “The King Lawler will be appearing for a special night at the Northern Lights Theater at Potawatomi Bingo Casino on February 22nd.  Tickets are available now at www.ticketmaster.com