By OWW Contributor on October 9, 2014@owwcom 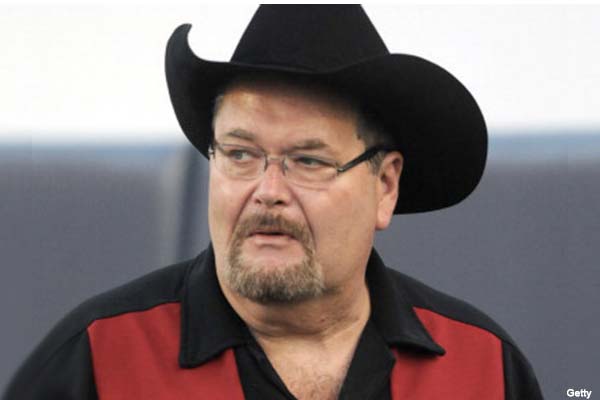 MMANews.com recently conducted an exclusive interview with WWE Hall of Fame announcer Jim Ross, who recently made his MMA broadcasting debut for Battlegrounds MMA’s BattleGrounds O.N.E. pay-per-view from Tulsa, Oklahoma. It was a pleasure speaking to Mr. Ross for almost an hour, here are the highlights:

How He Got Linked Up With Battlegrounds MMA:

“They are an Oklahoma based company and the principals, I think, have been following my work for a good while, pretty much most of their lives. I make it pretty clear, whether it be on my Twitter account or my blog, my website, I’m a big MMA fan. There’s a few bucket list things I’d like to do now that I’m not obligated to be on the road every week with WWE. They approached me and asked if I was interested, I told them I was. They worked out our arrangement with my manager.

I said there’s only two things that I need added to my contract – I need transportation as soon as the PPV concludes to get me down to Ft. Worth, Texas so I can watch Oklahoma play TCU Saturday afternoon, because I’m a big OU supporter. The second thing I’d like to request is some input on who I work with. Because I didn’t want to work with someone that might be somewhat resentful that a non-MMA traditionalist is doing the play-by-play on the show, because they have to work with the ‘wrestling guy.’”

Has He Gotten A Negative Reaction In The MMA World For His Background In Pro Wrestling?

“I actually haven’t experienced it at all. I haven’t had anybody be anything but respectful and polite in regards to my work. I’ve been asked some interesting questions. The questions that have surrounded me have been, ‘What is your level of expertise?’ I’m a major fan of the genre. I’ve spent hundreds of dollars in my life buying pay-per-views. I read about it, I study it, so I think I’m more than a casual fan, let’s put it that way. Am I on all the websites, am I trying to find out all the dirt and the intricacies of the fighters personal lives? Absolutely not. But do I watch the shows on FOX? Do I watch th pay-per-views? Absolutely. So, that’s kind of what I’ve been saying and the issue is that I don’t have to be the expert. That’s why Chael Sonnen’s here.”

Why He Decided To Work With Chael Sonnen:

“He was my choice to be my partner and we had never met until this week. We had talked on the phone, I knew that he was a fan of my work from back in the day. I sought him out because I thought it would be a new role for him, a new challenge. It might recharge his batteries from being a studio guy for FOX and having the issues with the Nevada State Athletic Commission. He lost his UFC job, he lost his FOX job, I thought he’s having kind of a rough year. He’s extremely talented, very bright, entertaining, informative, but he’s never done color commentary cage side. I thought maybe this would be a new adventure for him. It’s certainly a new adventure for me. Not withstanding the fact that I’ve probably done more hours calling pay-per-view television than anybody alive. So doing the fundamental things of a broadcast, I have a solid working knowledge of fights, I have a good feel for the timing but as far as being an expert of technical application of holds or counters or reversals, strategies, that’s what Chael’s here to do and I think he’s going to do a great job with it.”

“I said, ‘Look, I don’t want to be a prima donna, but I think that if you look at the marketing aspect of the show, Battlegrounds MMA isn’t yet a household name and who knows? They may never be a household name. I don’t know that. But I know they’re committed to this tournament format. They like it. They’d like to do more shows. Of course, it remains to be seen how successful this one will be. It’s certainly priced fairly. $20. So, I’m thinking that there’s an opportunity for all of us, there’s an opportunity for Chael to perfect his skills in a new role, there’s opportunity for me to get a bucket list thing done. Who knows, there may be other opportunities for me going forward in MMA. You never know. So I’m approaching this form a preparation and mental standpoint that this is my WrestleMania. I’m going to do one of them, if I can do more, it would be a blessing and if I don’t do anymore, I got to do the one that I wanted to do. I got to do one. So, I’m approaching it as positively as I can. Chael and I have been kind of joined at the hip since mid-week, like 12 hours the first day we met. We had a lot to talk about, just philosophically, what my role is going to be, a lot of things.

Any time a broadcaster works with a big crew, one thing he finds is that broadcasters in every genre like working with the same producer. The same director, they want to hear that same voice in their ear. They want to have a comfort level. For Chael and I, not only are we working together for the first time, we’re working with this crew for the first time.  So there’s a lot of anxiety-like issues in that respect, but nothing anymore than it would have been otherwise. There’s no way to avoid that, there’s only one first time and this is it, so I look at it more of a challenge.

We both like challenges, we’re both very competitive, I’d say that we both have sizeable egos in the fact that, in pro wrestling, if you didn’t have a sizeable ego as a defense mechanism, you didn’t last long, and I had a 40-year career in that world. So I have confidence in my ability. Some people don’t understand, my best work in pro wrestling was when I knew the least amount of details going into a match. Even though the endings were obviously pre-determined, I did better when I reacted to what I saw, organically. I was a fan, I was a student of the game, I was emotionally invested as I am with this. I watch my monitor like any other broadcaster and call it like I would if I was watching a college football game. You prepare then you let the game unfold, you let the game come to you and you document what you see. So, that’s what we’re doing here.”

Has He Had A Chance To Rehearse With Chael Sonnen Leading Up To Their Broadcasting Debut Together?

“Nope. At 9pm eastern, we’re going to do an hour of prelim fights. We’ll be able to get a little rhythm going, build some momentum. We did some stuff today with the media, it was pretty seamless, we meshed real well. I’m used to the showbiz world of pro wrestling and working with some outrageous characters as broadcast partners. When Chael is on, and he was today, he fits that mold. He can sell a fight better than anybody.”

“Absolutely. Without a doubt. He’s really bright, he’s well-read. He gets it. He understands how to talk in sound bites, he understands when to be funny and when to be serious. He feels things.”