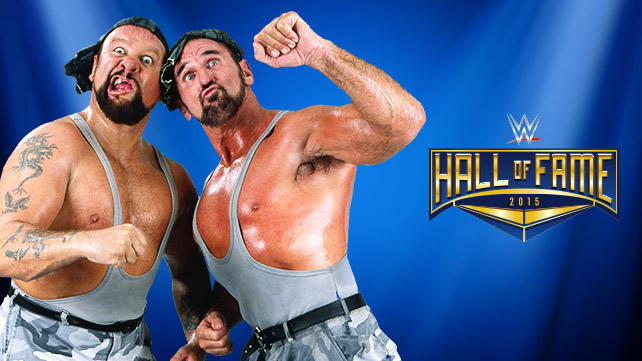 The Bushwhackers marched their way into the hearts of the WWE Universe during the 1980s and ‘90s. Now, cousins Luke & Butch will knock down the doors of the WWE Hall of Fame with their patented Battering Ram, as the Kiwis join the Hall’s Class of 2015.

The Bushwhackers’ journey to immortality began 50 years ago in their homeland of New Zealand, where the two joined forces in regional companies, catching the eyes of North American promoters. Luke & Butch made their first splash in Stampede Wrestling, the Calgary-based territory ran by WWE Hall of Famer Stu Hart, before moving south into the United States.

Though Butch briefly left America in the early 1980s, he soon returned to join forces with Luke once again. Then known as The Sheepherders, the New Zealanders quickly earned a reputation as one of the most vicious tag teams in all of professional wrestling, leaving crimson-covered opponents in their wake from the Pacific Northwest to Puerto Rico and everywhere in between. Their brawls with teams like The Fabulous Ones and The Fantastics are still remembered as some of the most brutal ever.

In 1986, The Sheepherders settled down in Bill Watts’ Universal Wrestling Federation, almost immediately defeating “Dr. Death” Steve Williams & Ted DiBiase for the UWF Tag Team Titles. When they weren’t wrestling for Watts, Luke & Butch were traveling around the country, engaging in wild brawls in stalwart NWA territories like Florida and Jim Crockett Promotions, the precursor to WCW.

After Crockett absorbed the UWF in 1987, The Sheepherders jumped ship. With future WWE executive John Laurinaitis carrying the New Zealand flag for them, Luke & Butch stomped into the NWA, rekindling their rivalry with The Fantastics. However, just as it looked as they were on the verge of capturing championships, the Kiwis signed with WWE. Fans expecting The Sheepherders to bring their brand of brawling to WWE were in for a huge surprise when Luke & Butch made their debut in late 1988.

Instead of the vicious Sheepherders, the WWE Universe was introduced to The Bushwhackers, a pair of fun-loving cousins clad in mangled baseball caps and camouflage. Luke & Butch stomped to the ring in manic fashion, swinging their arms in a manner that fans couldn’t help but imitate. The New Zealanders also interacted with the WWE Universe in another unique fashion: licking their heads. The toothless cousins quickly made their mark on The Grandest Stage of Them All, defeating Jimmy Hart’s Fabulous Rougeau Brothers at WrestleMania V.

The unorthodox Bushwhackers soon engaged in a heated rivalry with another Hart-managed duo, Rhythm & Blues. Luke & Butch saved the WWE Universe from listening to The Honky Tonk Man & Greg “The Hammer” Valentine’s off-tune caterwauling at WrestleMania VI, masquerading as roadies and smashing their instruments in front of a packed SkyDome in Toronto. In 1991, Luke made a stunningly brief appearance in the Royal Rumble Match, where he marched into the ring, was immediately tossed out, then marched back to the locker room.