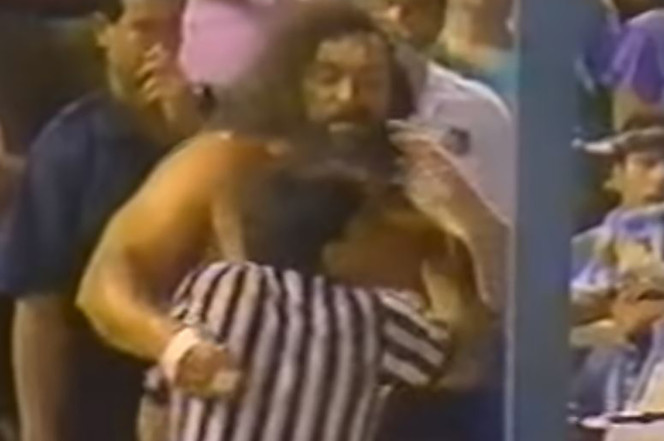 Monday marked 29 years since the death of Bruiser Brody — one of the all-time great wrestling characters — who was stabbed in a backstage altercation in Puerto Rico.

SunSport looks back at one of the most controversial deaths in the history of pro wrestling.

Who was Bruiser Brody?

With his 6-foot-8, 280-pound frame and scarred forehead, Brody was an intimidating figure.

He was a true innovator of the brawling style — and his wild-man character helped lay the groundwork for what later became hardcore wrestling.

Brody wrestled all across the US — including WWE (then WWF) — and was a huge star in Japan, where he formed a dominant tag team with fellow hard hitter Stan Hansen.

But Brody had a rep for being just as intimidating behind the scenes, too. He could have volatile relationships with wrestlers and promoters, and reportedly refused to lose matches.

During one infamous cage bout against Lex Luger, he stopped “working” mid-match, suddenly no-selling Luger’s offense and refusing to cooperate with Luger or the referee.

What happened on the night of his death?

On July 16, 1988, Brody was set to compete in Bayamón, Puerto Rico, for the WWC, a promotion owned by Puerto Rican legend and WWE Hall of Famer Carlos Colón.

Mantel recalls seeing Colón sitting alongside the man who would stab Brody, José González, who wrestled as Invader 1.

“I’ve always been able to feel tension in a dressing room … and boy I felt it heavy that night,” Mantel said. “But I couldn’t place it, I didn’t know where the tension was coming from.”

Mantel left the dressing room to look out into the stadium. When he returned five minutes later, Brody had been stabbed in the stomach.

From the accounts of other wrestlers present in the locker room, González asked Brody to come into one of the shower stalls to talk business. It was commonplace — and apparently still is — for wrestlers to go over their matches privately.