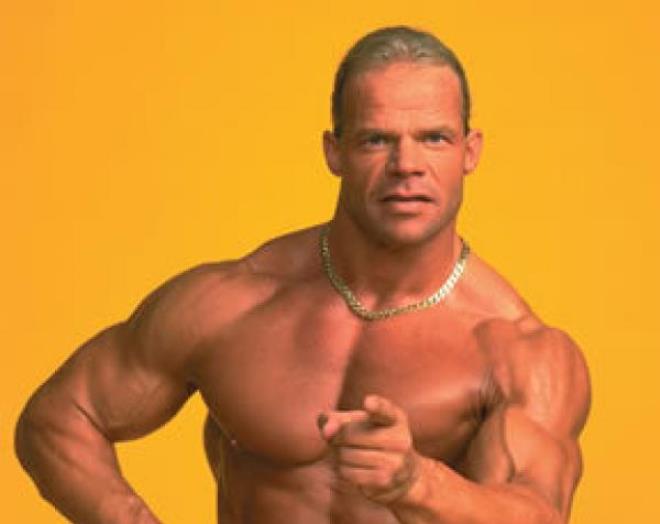 “The Total Package” Lex Luger is one of the most recognized professional wrestlers in the history of the sport. He was a two-time WCW World champion and a five-time NWA/WCW United States Heavyweight champion. He is best known for his feuds with Sting, Hulk Hogan, and Ric Flair as well as being a member of the famed Four Horsemen. Luger was selected as the Pro Wrestling Illustrated Rookie of the Year in 1986 in a class that included Sting and Bam Bam Bigelow. He was also a standout in football, playing for the Miami Hurricanes before a career in the CFL, NFL, and USFL.

On October 19, 2007, Luger suffered a stroke, which led to temporary paralysis. He was in a quadriplegic state for a month after the surgery, but is able stand for short periods of time with his walker. Today, Luger presents a message of hope to thousands across the country.

“The Frank Gotch Award was established to recognize wrestlers who have brought recognition to wrestling beyond the mat,” said Bill Murdock, 2007 winner of the Lou Thesz World Heavyweight Championship Award and a member of the Hall of Fame selection committee. “Lex Luger personifies this award. His positive message has touched countless people throughout the world. It is an honor to induct Lex into the 2016 Class of the George Tragos/Lou Thesz Professional Wrestling Hall of Fame.”

A native of Humboldt, Iowa, Frank Gotch—a professional wrestler—became one of the best-known athletes in the world during the early 1900s. He won the American title in 1905 from Tom Jenkins, and then took the world title in 1908 from George Hackenschmidt. The 1911 rematch with Hackenschmidt (known as the Russian Lion) drew a crowd of over 30,000 people to Comiskey Park in Chicago. Gotch triumphed again, winning in two consecutive falls.