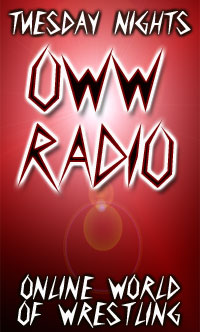 Host Alan Wojcik is joined weekly by national contributors like Scott Fishman & Jim Varsallone of the Miami Herald, Phil Strum of the Poughkeepsie Journal, Anthony Castellano of Newsday (NY), Kevin K. Scott of Under the Ring, Sarah & Ari Daigen of “In This Very Ring” plus members of the Wild Talk Radio roster like Spug, Mase, Sir Rockin & Tim Stein. Plus the big boss of Online World of Wrestling, ClickWrestle, Diva-Dirt.com and Chickfight, the Executive Board Member at Cauliflower Alley Club Jason Deadrich will be stopping by from time to time.

Every week until we get to WrestleMania 27 in Atlanta, GA we will be going back in time for WrestleMania Memories, talking about the previous 26 mega-events and hopefully talking with a superstar legend about their greatest PPV matches.  We’ll also open it up to our listeners who have attended a WrestleMania or maybe heading to Atlanta on April 3rd.

In keeping with that theme on February 22nd during the 10pm hour, the creator of www.IWantWrestling.com DAVID LAGANA will join the program to talk about his time as a lead member of the WWE’s creative staff, his current role in ROH & HDNet and his new passion; his website I WANT WRESTLING and the entertaining yet informative podcasts Formerly Creative & Press the Press.

While we’re at it with announcing upcoming guests, if things go right at the WWE Elimination Chamber PPV our March 1st guest will be the WWE champion. The one and only JERRY “the KING “LAWLER will be on during the 10pm hour to talk about his Hall of Fame career, the WWE, a possible WrestleMania 27 match and his tag team match with his son Brian Christopher as they take on Bill & Jamie Dundee for the first time EVER!  It is taking place at CCW’s LEGENDS OF WRESTLING event on Wednesday March2nd at the Evansville Memorial Coliseum. Find Coliseum Championship Wrestling on Facebook to read all about this huge event.

If that wasn’t enough, on March 8th former WWE/NWA/AWA World Tag Team champion Road Warrior Animal will be our featured guest at 9pm to discuss the release of his autobiography “the Road Warriors: Danger, Death, and the Rush of Wrestling” to be released on March 1st.
You can listen LIVE on our website www.owwradio.com as well as the newly redesigned www.wildtalkradio.com. Both sites offer an interactive CHAT room to join other listeners in liking or hating the show. Call into the show LIVE @ 267-297-1397. Remember we do accept any and all opinions! Skype users can call Sir Rockin who is our technical producer.

Check out our OFFICIAL Facebook page by LIKING Online World of Wrestling-OWW Radio and be sure to visit the other pages in the network. Looking for a past show, then log onto www.clickwrestle.com/podcasts/owwradio. ClickWrestle Video On-Demand is also home to thousands of matches from around the globe.  In addition we can be found on iTunes at http://itunes.apple.com/us/podcast/oww-radio/id334739148?ign-mpt=uo%3D4. Best part it’s FREE!!
Visit the #1 spot for professional wrestling news, profiles & photo galleries www.onlineworldofwrestling.com You can also follow us through www.twitter.com/owwcom and Alan can be followed through www.twitter.com/MyNameIsWojcik