Home / TNA / Low-Ki is once again a champion

Low-Ki is once again a champion 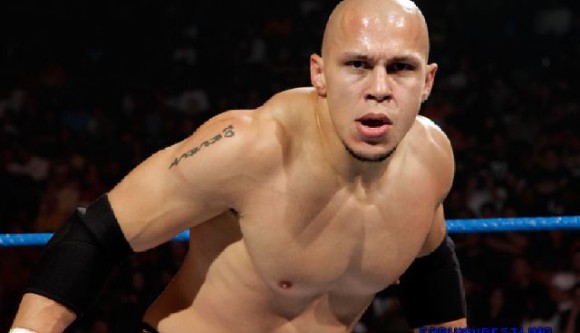 On tonight’s TNA IMPACT wrestling, Low-Ki challenged current TNA X Division champion Austin Aries for the gold.  Aries just won the title last week…and after only 1 week, he would drop the title back to Low-Ki, who had a little help from his friends.

Read the full recap of the match here:

Ki connects with a few strikes before Aries clotheslines him, and then Aries connects with a spinning elbow before applying Last Chancery. Ki makes it to the ropes so Aries calls for a Brainbuster, but Ki blocks it so Aries throws him outside and sets up a suicide dive. MVP pulls Ki away and Aries stops, then he tries to suplex Ki back in but Ki snaps his head on the ropes and kicks him onto the floor. Aries makes it back in and catches Ki with a discus forearm, then he connects with an IED and calls for a Brainbuster but Ki kicks him in the head. Aries kicks him and applies Last Chancery but Joe and MVP jump on the apron, and the ref stops and tries to regain order. Aries splashes them and heads up top, but Kenny King runs in and crotches Aries on the turnbuckles, then Ki hits a Ki Crusher for the win.