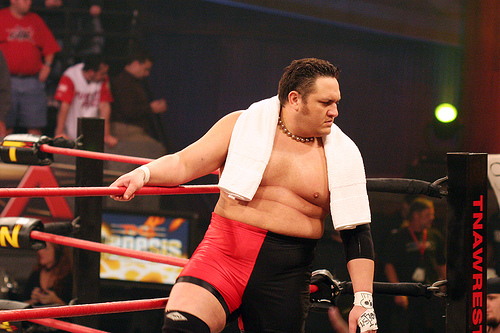 All three of these men are former X-Division Champions. Storm introduces Sanada to the crowd as the man that ended Great Muta’s career. The bell rings with all three men circling each other. Ki and Joe exchange some kick attempts and then get in each other’s face. Sanada then lays them both out with a Double Dropkick which sends Ki to the floor. Sanada and Joe exchange strikes before Joe destroys Sanada with strikes. Joe hits a Snapmare Takeover on Sanada followed by a chop to the back and a round kick to the chest.

Joe goes for a Knee Drop but Sanada rolls out of the way and catches Joe with a Sliding Dropkick! Ki comes in and lays into Sanada with chops. Ki hits the ropes and Sanada leapfrogs him and then goes for a dropkick as Ki bounces off the ropes again but Ki holds onto the ropes. Ki goes for the Shining Wizard on Sanada but he ducks only for Ki to catch himself and hit a Back Kick to the back of Sanada’s head! 1…2…NO Sanada kicks out!

Ki charges at Joe but Joe backdrops him over the top to the floor! Joe sets up for a dive but Sanada catches him with a hurricanrana! Sanada attempts to whip Joe into the corner but Joe reverses it and nails Sanada with a Running Back Elbow followed by Leaping Enziguri! Ki climbs back in the ring as Sanada rolls out and comes face to face with Joe. Sanada trips Joe and tries to pull him out but Ki comes flying through the ropes with an insane Flying Dropkick that sends Sanada into the ropes! Ki slams Sanada into the ring apron and lays into him with chops as Joe flies through the ropes with the Elbow Suicida onto Ki & Sanada! Joe tosses Sanada into the ring and hits a Powerbomb! 1…2…NO Sanada kicks out and Joe transitions into the STF! Sanada breaks the hold by biting the hand of Joe and then he gets back to his feet and dropkicks Joe.

Ki comes out of nowhere with the Tidal Crush (Cartwheel into a Leaping Enziguri) on Sanada for a near fall! Joe and Ki exchange some NASTY forearms before Joe takes the advantage following a series of jabs. Joe then goes for a series of rights and lefts but Ki does his Bruce Lee impression of ducking each one and then backs Joe into a corner with a series of stiff palm thrusts. Ki hits a nasty front kick and then charges at Joe only to eat a Standing Uranage! Joe lifts Ki up to the top rope and attempts the Muscle Buster, but Ki counters into the Hanging Dragon! Joe falls to his knees as Ki locks it in but Sanada comes in and breaks the hold. Sanada attempts the Tiger Suplex but Ki fights it off so Sanada attempts a Dragon Suplex instead! Ki lands on his feet and hits the Standing Warriors Way on Sanada! 1…2…NO Sanada kicks out! Ki charges at Joe right into the Snap Powerslam! 1…2…NO Ki kicks out and Joe immediately transitions into the Cross Armbreaker!

Sanada breaks the hold with a Standing Moonsault to Joe! Ki rolls out to the floor and Sanada attempts a Tiger Suplex on Joe but Joe breaks it with elbows and then Sanada catches Joe with a bridging rollup! 1…2…NO Joe locks Sanada in the Coquina Clutch! Sanada taps!

Low Ki is scheduled to face Samoa Joe at the next IMPACT taping in New York City on August 5, 2014.