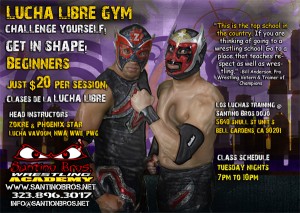 Bell Gardens, CA – The summer is kicking off at a rapid pace here at the Santino Bros Wrestling Dojo.

Los Luchas training is still in full swing every Tuesday night at 7:30pm.  Los Luchas Phoenix Star and Zokre, known as one of the hottest high flying tag teams in the US will train you in both the traditional and Americanized style of Lucha Libre, one of the oldest and respected wrestling styles in the world.  Now they are expanding their horizons and starting a new promotion, Los Angeles Wrestleague (LAW).  Their debut show will be July 21, 2012 in Huntington Park, CA.  We wish them great success in this new promotion.  More details coming soon!