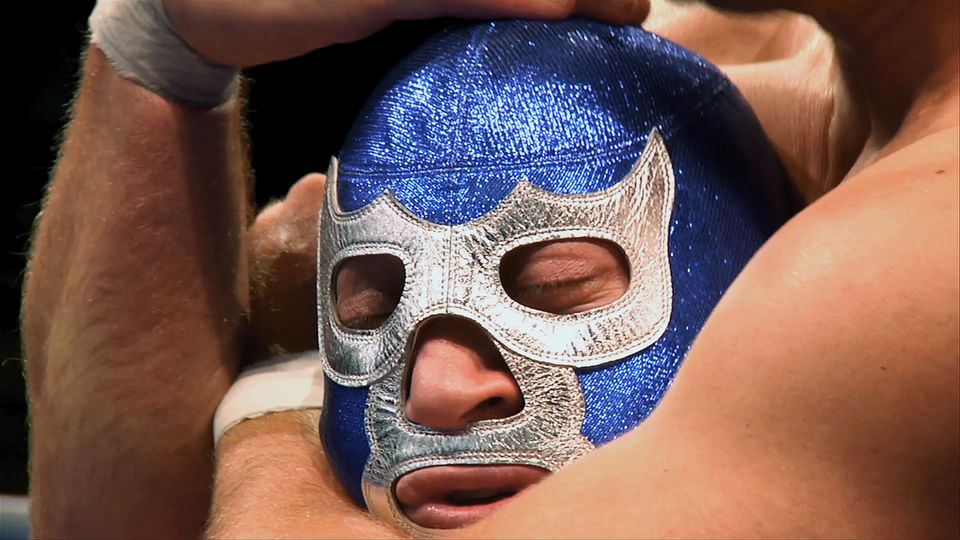 After reading the NY Times so-so review of it last Friday, and watching the first few minutes of the magnificently shot Lucha Mexico documentary;  when one realizes there won’t be any actual narration had me concerned. But then the graphics and wrestlers speaking kind of took care of that.  Viewers may not realize it was reportedly shot well over 4 years at many, many arenas beyond the two historic ones(Arena Coliseo y Arena Mexico) and again over that period of time which ended over a year ago or about when Perro Jr died.  Only qualm I had was that Hector Garza was shown quite a bit in footage standing in-ring, next to Perro Jr but without any mentions or graphics naming him as most all the other lucha stars had. Not until the credits rolled did they mention Garza’s name for the first time and that he passed too.  But to the film’s credit, he was not one of the luchadors focused on.  This of course is just minor quibbling.  I think everyone who loves the biz will enjoy this film greatly.  And learn from it even though the boys really don’t break kfabe.  Had one of us done it “RF Style,”  certainly the boys would’ve broken pretense and any kfabe attempts.  But the director and crew were normal people!  Not obsessive smarks.

Shocker came off like the “star” sort of of the film perhaps because he was a true true luchador who speaks Spanish fluently, went to school in the states and I believe did his great amateur career here. Here’s super proud of his pro wrestling legend/promoter dad and(y) his folk signing star mom!  That’s major. Another was “Strongman” Jon Anderson when I asked him about his training at APW(he grew up/still lives near us in Novato, CA) admitted his agent placed him in APW to learn some basics over a few weeks and then they “fudged” his resume claiming he’d been trained and worked far longer to get the NJPW gig where I don’t believe he worked too long but it helped land the more longterm CMLL/EMLL job.  He’s now added motivational speaking to his gym and training of others since he’s been outta the biz for about 2 years or so once his time in Mexico was done in terms of regular tours.   There was one of several incredible scenes in the docu where he was progressively lifting heavier weights until the skin was coming off his palms which were bleeding from all the weight.  That was something.  Showing him back in northern Calif at his Novato home as a loving husband and dad to his daughters really humanized him. For all the time he was at APW, again I really didn’t have a chance to get to know him as I do all of APW’s talent from the booker/owner Markus Mak on down to our refs/head bootcamp trainer/genius Sparky Ballard.

Didn’t know much about the actual death of lucha great Fabian El Gitano who primarily ran the Mexico City gym where many of the boys(Shocker, Strongman, etc) worked out in and that was heart breaking as was Sexy Star talking about lucha lifting her from her own depression and thoughts of suicide.  Fabian died “in his sleep”(uh oh-we’ve heard that too many times) but had been depressed about having to lose his mask in the ring, and then was lost without that ability to hide behind that identity he’d crafted and loved for so many years.  They showed footage of many lucha greats who’d passed too young like the high-flying Oro who we recall very clearly and still miss.  Has it been that long since we lost you?   Man.

Fantastic local footage anywhere they went and not just of the exteriors of the various venues. Stunning at times. Perfect music for each district and area.

They eventually told the story of CMLL/EMLL and it being the oldest promotion in the world but thankfully it wasn’t all about the Lutteroth/Alonso group.  I was hoping they’d shine a light on the other lucha promotions of note(only UWA wasn’t mentioned) and they did so very well.  Quite a segment on AAA, the short-lived Perros del Mal promotion and other smaller ones and for some reason I couldn’t figure out, repeat footage taken at lucha fan fests(similar to WrestleCon conventions, etc).  They ended with the ominous apparition so many feared, that when WWE began to tour there, they’d outshine the classic, tried and true, real lucha that’s part of Mexican nation’s culture and so much more.  The wrestlers seemed to say tradition will survive and live on past the circus coming to town and that was a nice way to end.  The film really has no narration, so the viewer forms opinions as to right and wrong, where lucha is headed, etc on their own.  Which is nice not being led by something wrestling-related for a change.  I thought overall, despite a few minor minor things few would ever notice; this is a brilliant documentary and perhaps the best one I’ve seen in years, let alone on lucha.  From Lutteroth history what ochenta amos ago to current and beyond.   All with lovely footage all over Mexico, some Aztec history lessons and well-placed, meaningful background music.  Shocker for example at home with his mom, showing off his photos of his dad, his amateur wrestling days, his many cool sequined famous ring jackets, his old and brand new taco/food 1000% Guapo restaurant plus working at Arena Mexico in front of sold-out crowds to mud-ladden spot crap shows in front of dozens.  He and Ultimo Guerrero for example(even Super Porky Braso) gave 100, make that 1000% as our industries true professionales do.  I’m throwing in some Gringo-ized Spanish here every once in awhile, so hoping you guys get it.

The audio of the slaps, hits y punches, the bumps was incredibly miked and effectively presented as you’ll see below.

Overall Lucha Mexico really exceeded any expectations and is worth viewing by everyone.  At the great San Rafael/Marin renovated theatre I was at, there were even some non-sports fans who said they really enjoyed it and had no idea about lucha really.  They were quasi former WWF fans they said and the Lucha Undergroup type over-amplified audio of punches, hits and bumps really made them oooh and aaah.  And that they could relate to Shocker, Jon Anderson, Fabi Apache, Sexy Star and some of the others. This theatre had the latest speakers and amplifiers that made this 5 star terrific film even better.

I was asked last minute to introduce and q/a this film afterwards.  But oddly had no idea of it’s presence until last week!