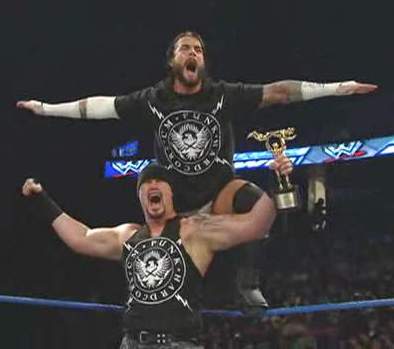 LUKE GALLOWS DISCUSSES LEAVING WWE, WHETHER HE’D GO TO TNA, THE ORIGINAL PLAN TO END JESSE AND FESTUS, AND MORE By WorldWrestlingInsanity.com

Less than one week after his WWE release, Drew “Luke Gallows” Hankinson is up at ClubWWI.com to join James Guttman for a 40 minute uncut shoot interview – his first audio discussion since leaving WWE.  The huge list of topics can be found at: http://www.worldwrestlinginsanity.com/am2/publish/newsnotes/ClubWWI_Luke_Gallows.shtml

Obviously the first question on everyone’s mind is life after WWE.  James Guttman asks Gallows about his release last Friday and Drew was surprisingly upbeat.  He explains to ClubWWI.com members:

“Ever since Black Friday – as soon as I got the call –  I’m a real positive guy and I wanted to hit the ground running.   So I’ve got a guy who’s doing some booking stuff for me so I’m up and running on that.”

Drew is currently taking bookings at: [email protected].  He goes on to speak about how this release is nothing to feel bad about.  In fact, with his youth and enthusiasm, it actually opens a lot of doors…

“I’m really excited about what the future has in store for me.  I have a lot of exciting stuff coming and new opportunities.  Stuff I wanted to do but couldn’t do because I’ve been under a WWE contract since I was 21 years old…I think there’s a lot of untapped potential in Drew Hankinson, Freakin’ Deacon, Fake Kane, Luke Gallows, Festus, all those former monikers and whatever it morphs into now.”

Of course, the biggest question that Drew is going to get going forward is about TNA.  JG says that everyone will be asking him that until he either goes there or heads back to WWE.  Hankinson is aware of that and is straight forward about his feelings regarding Total Nonstop Action and the direction they’re going. As his ClubWWI interview continues, he explains:

“I’ll be honest with you, man.  As you can tell from this interview, I’m a wrestling fan and a fan of this business.  I have friends in TNA and I’ve been watching the product.  I watch it every week and I’m a fan.  I think it’s getting better and better and it’s cool. I think that TNA Reaction Show, I’m sure a lot of you guys watch that, is one of the coolest shows on TV, especially if you’re a wrestling fan and getting to see that perspective on it.  I dig it.  I think that’s very cool.  I also noticed their ratings since to be on the incline as well.  I think they have a lot of good things going down there.  I got a lot of good friends down there.  And now it’s packed with legends and the top headliners from the business from when we were growing up too so I think it’s really cool.  I would love to do something there if the opportunity presents itself. I think that might be a good place for me to step out of the box.  I think I might be able to help  them and they might be able to help me.  So we’ll see what happens when the 90 days are up.”

The former Straight Edge Society member spoke about all his time in WWE dating back to the dropped Fake Kane angle, the birth of the Freakin’ Deacon and stories of staying in character as Festus.  James and Drew talk about the Festus character in -depth and the sudden end to his team with Ray “Jesse” Gordy.  Was there something else planned?  A feud?  A split?  Anything?  Gallows addresses the sudden ending and reveals where they were headed before the Draft to ClubWWI.com listeners:

“We were talking about turning heel and having Ray…step away from wrestling and we even went and we pitched it hard. I always wanted to be, of course, a top guy.  I think I’ll get there.  But he was seeing it as he being a smaller guy and not wanting to do the tag stuff as much anymore.  They wanted to turn it heel and he was going to be my mouthpiece.  Like a Southern Daivari was to Khali almost.  We had worked out an intricate like 8 week series of stuff.  And I’m thinking of doing the creative end of stuff too. I wrote up the storyboard.  We were gonna end up doing it.  It was right around Draft Time.  I got the call I was drafted to Raw and he was staying on Smackdown.  Next thing I know, he was (laughs) Slam Master J.  We all saw how that worked out.  And I was comedy Festus on Raw, which was not the most successful stuff I’ve ever done either.”

Remember, Drew “Luke Gallows” Hankinson is just one of over 250 of wrestling’s biggest names ranging from Jesse Ventura to Jerry Lawler to Terry Funk, that can be heard the minute you log in to ClubWWI.com.  For all the latest news on Club guests, be sure to join our Facebook page at http://www.facebook.com/pages/The-World-Wrestling-Insanity-Dot-Com-Page/275219172353

Related Items
← Previous Story Download OWW Radio “Classic” now!
Next Story → How does WWE get out of this stipulation?