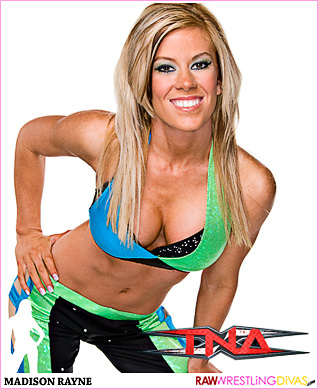 Former TNA Knockout Madison Rayne, who was released by the company a  few weeks ago, has posted a new blog talking about her TNA departure and  the backlash from fans afterwards due to the fact she is currently  pregnant with her first child. Here is an excerpt from the blog:

*Let  me first reiterate, *I was not released from my contract on bad terms,  with any ill feelings, or with the slightest bit of regret for giving  everything I had to Impact Wrestling for 4 1/2 years!* I’ve had what  seems like an endless number of tweets lately telling me that I need to  go wrestle elsewhere, and people cannot believe I got fired because I  was pregnant. Y’all, as much as I appreciate the support and the fact  that people were affected enough by my release to generate some sort of  emotion, please don’t stress over it. I’m surely not. As cliche as it  may sound, if I am meant to be back in a wrestling ring on television,  God will put me back there. And I have this overwhelming feeling that He  will, but for right now I’m so excited and so looking forward to being a  mommy and bringing the next generation of Queen Bee into the world.*

You can read Madison’s full blog by clicking: http://mamarayne.wordpress.com/