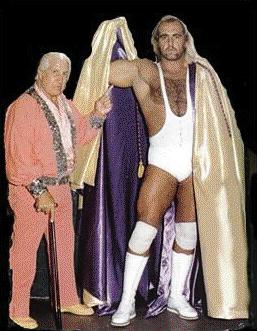 He was a man who kept giving. He was a man despised by many fans in the United States and overseas for his “Classy” Freddie Blassie character. Yet, when the curtain went down, Freddie Blassie, real name, Fred Blassman, was one of the most charitable men to ever step into a wrestling arena.

Freddie Blassie began his wrestling career at the ripe age of 17. Blassie, the son of blue collar working class parents, worked two jobs at this point in his life, serving as a butcher, while feeding his wrestling obsession during the evening.

During World War II, Blassie made the ultimate sacrifice, and gave of himself. Putting his life on the line, as part of what Tom Brokaw has called “The Greatest Generation” during that conflict.

Luckily for professional wrestling, Freddie came back in one piece, and quickly went back to the mats for his education in the ring.

Freddie Blassie won his first prestigious title belt in 1954, when he captured the NWA Southern Heavyweight Championship. Blassie would continue to win titles, even holding the WWA World Title on four occassions in his in-ring career.

Over the years of ring wars, Blassie would make his way to the World Wide Wrestling Federation (WWWF, the modern day WWE’s predecessor), where he would carry out the end of his wrestling career.

From there, it was too the corners, as Blassie managed “Superstar” Billy Graham, Nikolai Volkoff, a very young Hulk Hogan, Jesse “The Body” Ventura, George “The Animal” Steele, and many more of the Legends of Wrestling.

The most memorable match that Freddie managed may be The Iron Sheik‘s WWF World Title victory over Bob Backlund at Madison Square Garden in December of 1983.

Blassie would manage the Iranian on the evening in which “Hulkamania” took the WWF by storm, on January 24, 1984, as Hogan took the WWF World Title for his own keeping.

Throughout the mid-1980’s, Blassie would manage The Iron Sheik and Nikolai Volkoff to the WWF World Tag Titles. He would also do an enourmous amount of charity work for the federation in his career.

Not only that, Blassie was a star of music and television, as his release of “Pencil Necked Geek” lit up the charts on Dr. Demento’s novelty music show.

Blassie also, was possibly the first professional wrestler to appear on a sitcom, as he guest appeared on an episode of “The Dick Van Dyke Show” while he was WWA World Champion in California.

No doubt, Freddie Blassie was one of the true greats.  From his humble beginnings as the son of an immigrant to his final years of charitable work with the WWE, he truly remained “Classy”, and he is greatly missed.

Writer’s Note: Thanks to the Professional Wrestling Museum Online for some of the facts in this piece.

Don’t forget the previous Manager’s Corner  looking at The Original Diva of the WWF, Sunny.