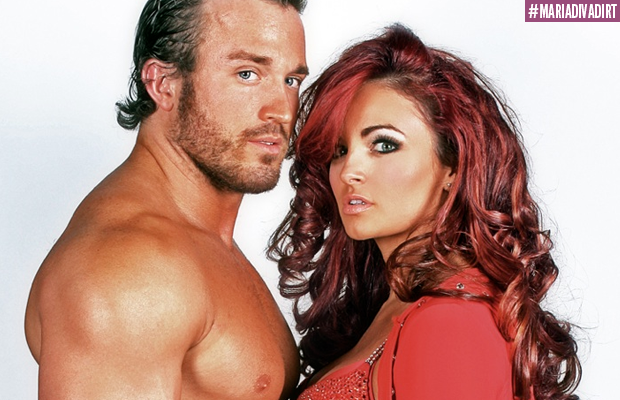 Diva Dirt is pleased to have former WWE Diva and the First Lady of Ring of Honor as our weekly columnist. Stay tuned each week for new blogs from Maria.

What’s up all you Stars and Studs!!!!

Thank you to everyone that has welcomed me into the Diva Dirt family. I have felt very blessed this past year for all the new family I am adopting. I am recently engaged to Ring of Honor wrestler, Mike Bennett and his family is amazing. I have spent a lot of time at the Bennett household and I always feel very welcome. Mike’s brother just had twin girls with his girlfriend so that is two more members to my ever growing family. I am part of fantasywomenbattles.com which is a competition to find the greatest female warrior in the world. The incredibly unique women that are a part of FWB have become a new sort of family while embarking on this journey, to learn to sword fight. I am an actress for Woodhaven Productions and I have completed two films with them this year. It was my first two completed films and it was an incredible experience. I made many friends while on set and I am proud of the work we did together. I signed a year contract with Ring of Honor and have found a brotherhood of wonderful inspiring people. And there are so many other business friendships and relationships I have made this year that are having a positive impact on my life. Of course, they all are different types of relationships but is one anymore important than another? I don’t know. I flourish in my personal life so much more when my career is going well so in some ways I think that my business relationships are just as important to keep my life balanced.

With that being said, I have had the hardest time trying to figure out what to talk about this week. I have started three different blogs and none of them seem appropriate. A LOT has happened in the last two weeks. My niece is turning 5, we lost a family member, BJ Whitmer and my fiancé, Mike Bennett had a wrestling move that didn’t go as planned which resulted in an injury, I moved back to Chicago, Total Divas got picked up for a second season (Apparently there is a fat twin?), some fan called my fiancé a moron, and I start school on Tuesday. It’s a lot to handle but it also the reason why I love wrestling so much. Everyone in wrestling has a story and unless you are a wrestling facts aficionado you would never really see the guys for who they are. It’s because of those stories, that even when I am old and grey, I will be a fan. Wrestlers live the hardest lives of any athlete or entertainer. There is no off season, no union, and no insurance package. Wrestlers work hurt, tired, or depressed for sometimes no reward. Wrestlers not only get beat up for a living but also sometimes entertain crowds of angry, hungry, and over stimulated fans. Time and time again I am impressed by the dedication these men and women have for this craft because even when you try to do everything right at any moment something can go wrong.

Ring of Honor has a brotherhood that I have never experienced before. Sure, I made some great friends at work but it was never like the sense of community/family I feel in ROH. We spend so much time on the road that sometimes we spend more time with our wrestling co-workers then we do our own families. Its nice to be able to feel comfortable at work too. Its nice to have a road family. BJ Whitmer and Mike Bennett had a rough weekend at a Ring of Honor show 2 weeks ago. Something went wrong while doing a piledriver. That night BJ ending up in the hospital with a collar around his neck getting tests to see if his neck was broken. It was terrible. I’ve never seen as much regret as I did in Mike’s eyes that night. Accidents happen in a wrestling ring all the time but whenever someone gets hurt you feel a sense of responsibility. But, BJ being the tough guy he is, was cracking jokes in the hospital making sure no one was bored or worried while waiting. Then, after the ROH show was over the wrestlers started showing up to visit. Car load upon car load of tired, beat up, and hungry wrestlers walked into the waiting room of a Toronto Hospital. These guys had just worked matches and rather than going to the hotel or getting dinner right after the show, they were there in the hospital visiting a fellow wrestler. Some of the guys were close friends with BJ but some were just co-workers checking in. Wrestler after wrestler smiling and bringing in positivity was the best thing that could happen in a situation like that. Wrestlers all come together in times of hardship to take care of our own. We will hear in the coming weeks about the extent of BJ’s injury but all we can do is hope for the best and learn from what happened. Wrestling always find a way to move on. Wrestling is the dream for these guys/gals and no matter how big the risks the love of the business is bigger.

The trials of a wrestler doesn’t stop at injury. Wrestlers are not just wrestlers. Most have 9-5 jobs during the week to fund their wrestling addiction when they start out. So, a wrestler that is a real life super hero on Saturday will be a waiter on Tuesday. It’s a tough road. Some go to school during the week because no matter how great the wrestler you can stop getting bookings or get hurt at anytime. When a wrestler’s friends are partying on the weekend, some independent wrestler is driving countless hours to an independent show to make 50 bucks that won’t even pay for gas and food for the trip. But when the wrestler arrives at the show he/she will again fall in love with this one sided wrestling relationship. These guys and gals have wives, husbands, kids, boyfriends, and girlfriends that also demand their attention. But, they show up every weekend to the Bingo halls and Knights of Columbus buildings to put on their Divine Comedy. These halls usually don’t have showers, locker rooms, and I’ve even been in one without a woking toilette but wrestlers show up as if it is their own personal WrestleMania because “you never know who is watching.”

It’s funny that I came into wrestling so backwards. I was a model. I was a Diva Search girl. I traveled all over the world with wrestling in the WWE but I never really understood “IT” until I went to that first Ring of Honor show. The intensity of that crowd and the fact that it was in the Chicago Field-house always seemed to stick with me. It’s such a beautiful example of what wrestling should be. The Ring of Honor guys weren’t doing it for the fame or money in that black ring with red ropes. They were doing it for the love of wrestling. I was listening to Daniel Bryan, Bryan Danielson, talk about being a wrestler on Monday Night Raw and it gave me chills because that is what I feel every time I go out in front of that Ring of Honor crowd. I may not be able to do what those wrestlers can do but I have such admiration for the wrestlers that can and I am proud to be a some small part of it. I appreciate it. I respect it. I respect the foundation that Daniel Bryan, CM Punk, The Briscos, Samoa Joe, Colt Cabana, Christopher Daniels, Lo Ki, Daizee Haze, and all the guys and gals before me built. I love the feeling of going through the curtain and knowing we are not putting on just a show. We are giving you glimpses into our real characters as human beings. It’s still real to Ring of Honor. The brotherhood, the wrestling, the code of honor, and the wrestlers are still real. It’s still real to me.