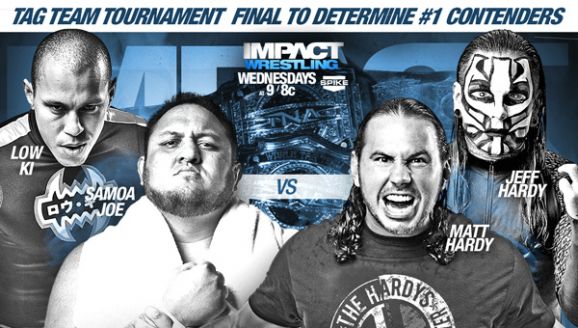 Matt and Jeff Hardy have won every other major tag team championship there is to hold, capturing the TNA World Tag Team Titles would complete an incredible journey for the brothers from Cameron, North Carolina.  If you look at the summer The Hardys had in NYC and competing in the thrilling Tag Team Championship Series, one would think that Matt and Jeff were born to wear TNA Tag Team gold.  After eliminating their competition can Matt and Jeff advace past Low Ki and Joe and raise those titles once and for all?

How shocking was it when Low Ki selected Samoa Joe as his partner for this Number One Contenders’ Tournament?  A fierce rivalry exists and Ki would certainly love Joe’s X-Division Championship one day, but for now, these two are heating up an already stacked Tag Team Division in TNA.

Who do you got?  The experience of The Hardys or the determination of Low Ki and Samoa Joe may be the deciding factors.  Matt Hardy, had this to say when IMPACTWrestling.com reached out earlier today.

“Both Jeff and I feel that even though we’ve gotten older, we’ve used our experience and wisdom to adapt into an even more successful version of ourselves as a team.  I feel that many of the fans believe that.  When, not if, we win the TNA World Tag Team Titles… We are validated and it becomes a fact.”

Are Matt and Jeff Hardy more motivated than ever?  Can Low Ki and Samoa Joe stop them?