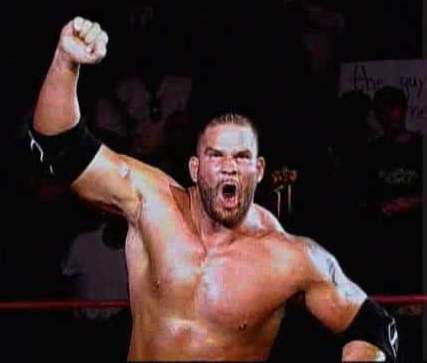 “The Blueprint” Matt Morgan Discusses His Growth & Evolution With TNA Over The Past Year, How His Feud With Kurt Angle Leading Into Last Year’s Bound For Glory PPV Helped To Solidify His Status At The Main Event Level In TNA, Fourtune’s Pending Collision With EV2.0 (And If Their Feud Will Come To An End At Bound For Glory On 10.10.10), Being Recruited By Ric Flair Into Fourtune (And His Response To Those That Believe “The Nature Boy” Is Taking Up TV Time), The Comparisons Of Fourtune With Other Factions From Over The Years, His Strong Message To Mick Foley/His Plans For Retribution Against Brian Kendrick (After Last Thursday’s iMPACT), The Chances Of Seeing Him Compete In The $100,000 Battle Royal Gauntlet On The October 7th Live iMPACT, Plus A Look At His Role On FOX’s “The Good Guys” (Airing This Friday Night @ 9PM ET/8PM CT)

“The Blueprint” joined The Big Mosh & “The Chairman of the Board” Todd Vincent in his return to “Your Home of Wrestling Radio” (to preview his forthcoming guest appearance on the season premiere of FOX’s “The Good Guys,” along with TNA’s Bound For Glory Pay-Per-View on 10.10.10), which is now available in Windows Streaming Media or via Monday Night Mayhem’s official Podcast on iTunes:

Being recruited by “The Nature Boy” Ric Flair, the comparisons of Fourtune with other factions over the years (and the similar ingredient they all had making each group successful), & his mindset leading into the “big battle” vs. Fourtune at Bound For Glory: “It’s simple…It’s like this. When I came out on iMPACT, and I said Ric Flair recruited me as his #1 recruit, I wasn’t lying. People thought that since I didn’t join the group immediately, that ‘The Blueprint’ was full of himself, and he’s juts exaggerating as usual. No. I’m not some kind of fortune teller. I wasn’t just predicting the future. It was already set before we went down that route. You look at any group, whether it be the versions of The Horsemen that have gone through the years back in WCW, or you look at any other important faction in the history of our business, what’s the one common denominator that every group always had? They all had the big freak, they always had some big monster. That was the one, yet very big missing ingredient they needed for Fourtune. As soon as I joined them, what happened? We started taking over the damn show. So I think that speaks the truth more than anything else does, and I think it’s a bunch of guys that are the best in the world at our craft from different perspectives. The high flyer in AJ (Styles); you have the best tag team in wrestling in Beer Money; you got Kaz, who has stepped up immensely; Doug Williams is one of the best wrestlers I’ve ever seen between the ropes. You put us all together with Ric Flair…I mean come the hell on! That’s a done deal. That’s a wrap. Who the hell’s gonna screw us? Well apparently EV2 has attempted to. It becomes tiresome, it becomes annoying that these old fossils just keep showing up on our show. We’re pretty much just sick & tired of it. I’m an equal opportunity @ss kicker. I don’t care if these cares are about a step away from their AARP memberships. I could care less. We’re gonna take what’s ours, and then once what we take what’s ours, we’ll take what’s yours as well next. That’s what’s going to be going on at Bound For Glory. You’re going to see a big battle. Fourtune is going to prove why we’re not only the best action in wrestling, but we own TNA…It’s only a matter of time.”

How he feels that he has evolved in the company since last year’s Bound For Glory (vs. Kurt Angle) to where he currently stands in TNA, why the frustration & issues we are seeing between Fourtune & EV2 go beyond the parameters of a wrestling storyline, Ric Flair making every one in Fourtune better individually & collectively, and why he disagrees with those that feel that “The Nature Boy” is taking up TV time: “Last year (this time at Bound For Glory), I was working with Kurt Angle, and we had a hell of a match, and it was one of the high points of my career. We brought in a lot of new guys since then, and that’s one of the problems that me & the rest of Fourtune have been having. It’s not like some written-out storyline that was handed to us. These are true feelings coming from all of us when you hear us speak about it, or more importantly, when you see us act on it (our hatred to a lot of these guys that just come into the company). Technically, you could say I was one, but I paid my dues. I didn’t just come in through this rolling door and just get boosted to the main event. People remember that I busted my @ss. I worked my way all the way up to that main event slot. And last year, vs. Kurt Angle, I thought I solidified that. With all the influx of new talent, I understand the company needs to grow, but Fourtune’s problem is that we just get sick & tired of it when it becomes the ’40, 50, and over club’ so to speak. Look at Ric (Flair). Ric’s not taking up TV time. He’s trying to pass his knowledge on to us. If you pay attention, he is single handedly going to make each & every one of us better…one by one and then correctively. At Bound For Glory, you are going to see us take out a lot of pent-up frustration over the last 365 days. You’ll see what we do to EV2 about it.”

His reaction to Brian Kendrick’s upset victory over him last Thursday night on iMPACT, why he doesn’t understand Kendrick’s association with EV2.0, & if we have seen the last between the two (based on the issues that started one week ago): “Brian Kendrick, I have no idea why in the blue hell he would try to stick his nose in the middle of this. It makes no sense to us whatsoever. He got lucky. He’s basically at the wrong place at the wrong time, and what I don’t get is why he would stick up for these older guys. They’re essentially taking his spot too, but he’s too stupid to see that. He wants to talk about these higher frequencies. Who knows what the hell that kid is talking about. He’s a total wack job. There was a part in the match when I think I kicked him in the face, and he’s sitting there on the ground smiling. And I’m going ‘What in the hell is wrong with this kid?’ Maybe that explains why he doesn’t see that they’re taking his slot as well. He’s actually going to try & stick up for these guys. That’s just stupid on so many different levels, and it shows you what kind of idiot Brian Kendrick is. And just like Tommy (Dreamer), just like (Mick) Foley, just like Stevie (Richards), just like Rhyno, just like Raven, he could get it too. Keep trying to screw with us, and he could get it too.”

The evolution of his acting career, his experience of guest starring on the season premiere of FOX’s The Good Guys (airing this Friday night @ 9PM ET/8PM CT), along with his forthcoming projects on the horizon: “I’m currently doing two movies right now. I’ve about to wrap one of them, and another one I start doing in about a month from now. The Good Guys (this Friday on FOX) is a great opportunity for me, and it’s a great opportunity for our company to get some mainstream publicity. You can’t deny one thing: I stick out like a sore damn thumb. When you watch the show (no matter if you’re a wrestling fan or not), people are going to click through the channels and go ‘Holy crap..look at the size of that guy,’ and then when you see the persona & the character I’m playing, people are going to get hopefully enthralled enough with it to continue watching the show that haven’t watched the show regularly. I felt honored that they chose my episode to be the big fall season premiere. That’s a huge honor. Very rarely will there be another opportunity where I get more sets of eyes on me than this Friday. It’s just a great chance for me to show that I’ve honed my craft, and that I’ve improved, and I’ll continue doing it to be perfectly honest.”

More is contained in the return of “The Blueprint” to The Monday Night Mayhem Radio Network, including Matt’s candid thoughts on whether or not we could potentially see him in the $100,000 Battle Royal Gauntlet on the live October 7th iMPACT, if he ever envisioned himself being an integral force in a faction with “The Nature Boy” Ric Flair this early in his career, even more on Fourtune’s current dominance in TNA, plus a special message to Mick Foley (as he gets ready to begin his “Countdown To Lockdown” book tour next Monday exclusively on “Your Home of Wrestling Radio”). Be sure to follow Matt Morgan on Twitter right now (at www.Twitter.com/TNAMattMorgan), and don’t miss three hours of Total Nonstop Action on Spike TV this Thursday: TNA iMPACT (featuring the return of Rob Van Dam) beginning at 9PM ET/8PM CT, followed by the hard-hitting docuseries TNA ReAction following at 11PM ET/10PM CT. For more information on TNA’s Bound For Glory Pay-Per-View (including ticket information, how you can be a part of the Fan Interaction in Daytona Beach), log on to www.TNAWrestling.com.