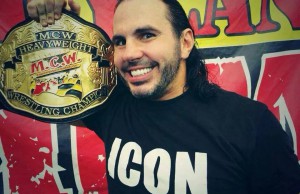 Ryan McBride (w/Head Of Security Ken Dixon) defeated Ruckus in a match where they fought all of the building using much of the Gymnastic equipment.

**After the match all 4 members of Black Wall Street jumped Christian York and Matt Hardy made the save. Drolix got on the microphone and started bragging about the Corporate takeover of MCW being complete. Words were exchanged with Matt Hardy and a challenge was laid out that if Matt Hardy would lose a match to Black wall Street’s Chuck Lennox that he would leave and never come back but if he could beat him then he would get an immediate match with Drolix for the MCW Heavyweight Championship