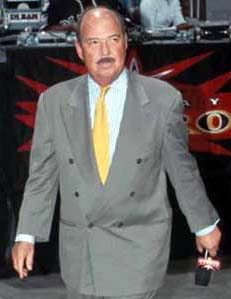 “Mean” Gene Okerlund  Discusses His Role At WrestleMania XXVI, This Year’s WWE Hall Of Fame Class, How The Bret “Hitman” Hart/Vince McMahon Saga Should End, The Return of “The Monday Night Wars” (Between The WWE & TNA), Hulk Hogan & Eric Bischoff At The Helm Of TNA, Why It’s Important To Not Turn TNA iMPACT Into “The Hulk Hogan Show” Or “Thunder In Paradise,” & The Legacy Of World Championship Wrestling As Compared To World Wrestling Entertainment

WWE Hall Of Fame announcer, “Mean” Gene Okerlund, was one of the special guests on this week’s live edition (03/01/09) of Monday Night Mayhem (presented by ReelWrestling.com), hosted by The Big Mosh, Blade, & “The Chairman Of The Board” Todd Vincent. You can feel The Mayhem live & in streaming audio every Monday night (at 7PM ET/6PM CT), exclusively on The Monday Night Mayhem Radio Network (www.MondayNightMayhem.com).

The legendary long-time backstage voice of the WWE, “Mean” Gene Okerlund, joined The Monday Night Mayhem Radio Network for his first-ever appearance on the airwaves of “Your Home Of Wrestling Radio.” As we count down the days to WrestleMania XXVI, one of the most recognizable announcers in the industry (who has appeared on AWA, WCW, & WWE television), who was enshrined into the WWE Hall Of Fame in 2006 for his contributions to the world of professional wrestling & sports-entertainment joined The Big Mosh, Blade, & “The Chairman Of The Board” Todd Vincent for an exclusive interview, which is now available in Windows Streaming Media or via Monday Night Mayhem’s official Podcast on ITunes.

The return of the “Monday Night Wars” (between TNA & the WWE) & TNA as a company with Eric Bischoff & Hulk Hogan at the helm: “I have some feelings, and I have the utmost respect for Hulk Hogan, Eric Bischoff, & that entire crew at TNA, and I wish them the best of luck. But I think it’s very important that they don’t turn it into the Hulk Hogan show, don’t turn it into ‘Thunder In Paradise,’ don’t turn it into Eric Bischoff on camera running the show. I think they need to mix it up and take advantage of all the great talent they have at their disposal. So quite clearly, we need to put the egos aside and let’s talk business, and I know Vince McMahon, in the back of his mind, is going to be talking about business all the way.”
Whether TNA has enough (with the likes of Hogan, Bischoff, & “The Nature Boy” Ric Flair) to really compete with the WWE, like WCW had the credibility with “Mean” Gene when he jumped ship from the then-World Wrestling Federation to World Championship Wrestling: “As long as Vince McMahon is sitting in that creative chair with his writers, I think it’s gonna be very tough if they depend on riding this Hulk Hogan pony into the sunset. I just don’t think now’s the time when your main even next week is Hulk Hogan vs. Ric Flair, and God knows I love them both. But we’re a little long in the tooth; they’re not Randy Orton, Ted DiBiase, they’re not John Cena, not even The Undertaker as current WWE stars are, and thus I think it’s gonna be an uphill battle…but what would you expect?”

Bret “The Hitman” Hart’s WWE return, what he feels will happen between the two at WrestleMania XXVI, & in what way this “saga” should end: “The Montreal Screwjob was such a hot item with wrestling fans & the industry, that this type of a return & closure, with the involvement of these two men, I think is a main event in itself. I think the set up for this is going to be great because I remember this happening 25 years ago, and it came off immaculately. I think this is going to be a very good storyline.”

The WWE Hall Of Fame’s Class Of 2010: I had tremendous respect for Wendi (Richter) when I worked with her both in the AWA & the WWE. It wouldn’t surprise me if some lady that had a million dollar seller “Girls Just Want To Have Fun” might be the inductor for Ms. Richter. That would not be a surprise to me, and it would be good creatively. Antonio Inoki is a worldwide piece of talent that has virtually done everything, plus he’s the founder of New Japan Wrestling. Ted DiBiase…long overdue. I think the time is right for Mr. DiBiase to enter the hall. And he was a great piece of talent because I worked with him all those years when he had Virgil as his sidekick. He was a legend, and he came in a little later. He wasn’t part of WrestleMania 1 or 2; he came in during the late ’80’s and made a big impact in the company as ‘The Million Dollar Man.’ He is going to make a good addition to the Hall Of Fame.”

How WCW was different from his days in the WWE in the late ’80’s/early ’90’s in regards to putting on a show: “I thought it was very chaotic & very unprofessional compared to the WWE. Everything was very tight; all of the matches were gone over in advance along with camera angles & everything, and we pre-taped a lot of the interviews that you saw. As a comparison, I would have to say that the WWE were on top of their game in terms of the production values; the way things were organized, backstage with the talent…and I mean with all the talent: with the on-air & the performers in the ring…just so much more superior to what we saw on WCW. There were a lot of shoddy matches, even though they enhancement matches, nothing was really planned.”

More is contained is this exclusive interview with arguably one of the greatest announcers & voices of all-time, including “Mean” Gene’s candid thoughts on his current role working with the WWE Classics On-Demand & WWE’s “Vintage Collection,” his plans for WrestleMania XXVI weekend in Phoenix, what he has been doing since his full-time retirement from the business, his memories of the Buffalo area, & so much more. Plus, you can experience an on-air reunion of two of WCW’s most-tenured announcers for the first time since the final telecast of Nitro: featuring “Mean” Gene Okerlund & The Mayhem’s National WWE Correspondent, Scott Hudson!