By OWW Contributor on November 7, 2014@owwcom 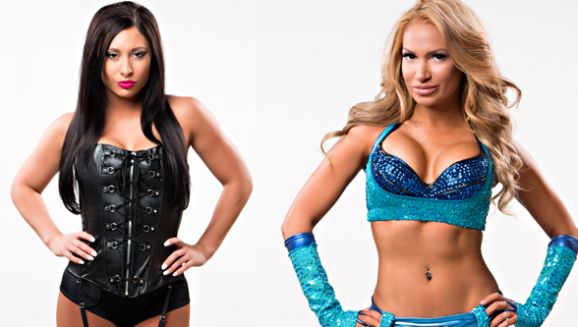 Meet Reby:
Reby started her professional wrestling career in 2010 and is an independent scene darling! However, she began her career as a professional dancer, performing nationally with the Amira Mor International Entertainment Company. Clearly able to move, this stunner also has an extensive modeling background, seen in magazines such as Playboy, GQ, Esquire, Supermodels Unlimited, and Stuff. In 2013, Reby married TNA Superstar Matt Hardy – talk about a pro wrestling power couple! Safe to say we all want MORE Reby!

Meet Karlee Perez:
Karlee started her career as a model and professional wrestler in 2009. Signed to World Wrestling Entertainment until 2012, Karlee has continued to make a name for herself by competing across the world! She was born to an entrepreneur family in Tampa, Florida and is of a Spanish, Cuban, Italian, Hawaiian, English and Chinese ancestry. Not just multi-cultural, Karlee Perez also has many different alias’s including Liviana, Maxine and The Candy Girl. Yes, we agree, Karlee is sweet!