Home / Behind the Scenes / Meet the man behind the mask

Meet the man behind the mask 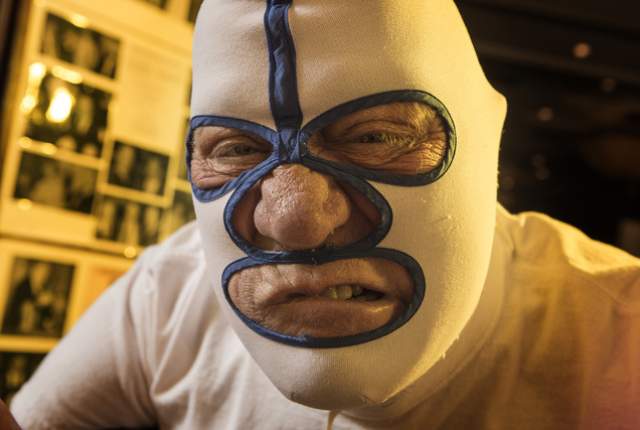 It was the final day of the Cauliflower Alley Club convention for old pro wrestlers at the Gold Coast, and “The Destroyer/Doctor X” was running late. That’s just how it is with masked men. With the exception of Batman and the Lone Ranger, they rarely show up on time.

In the walkway between the merchandise and autograph booths and glossy black-and-white photograph displays of the former turnbuckle smashers, a man from Kansas City named Rob Schamberger — “The Artist of Champions,” it says on his business card — was painting a portrait of Curt Hennig, aka Mr. Perfect, who was found dead in 2003 at age 44.

Schamberger makes his living painting wrestlers. He said he probably would just give this one to Mr. Perfect’s family, though.

In a square space formed by tables in the middle of the meeting room, the former grappler Bill White had started a cribbage tournament. White said pro wrestlers would play cribbage at the civic centers and armories and high school gymnasiums to pass the time before and between matches.

White, who is 70 and grew up in South Philadelphia, also danced on the old “American Bandstand” show. He could do the Swim and the Mashed Potato. He got to Rate-A-Record with Dick Clark.

He said he still had all of his original body parts, which is unusual among Cauliflower Alley Club members.

Around 11 a.m., there was a small commotion at the door.

In walked 84-year-old Dick Beyer, aka The Destroyer,” aka Doctor X. He was growling a little bit, but that’s just the way he talks. He was using a walker; otherwise he looked well. He was wearing shorts and a white wrestling mask with blue accents.

Children rushed to greet him — most kids love the masked marvels of the wrestling ring.