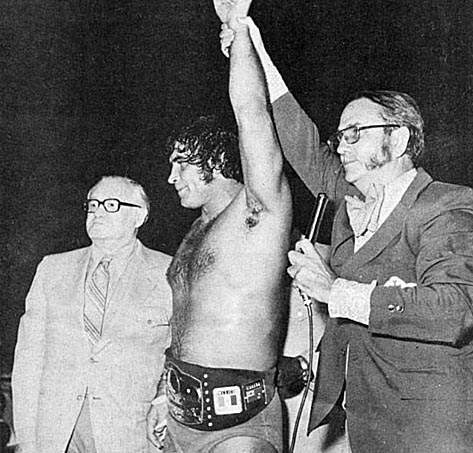 Memories of The Great One, Jack Brisco
By Mike Lano

Just after losing wrestling’s greatest friend, Georgie Makropoulos, we’ve now lost it’s modern-day greatest athlete with those amazing amateur credentials of his that Kurt Angle told me in 2001, “blew me away.” This guy was and will always be an incredible talent.

I had the pleasure of knowing Jack Brisco, from his times coming into my home base territory (Los Angeles/Lebell) and kept in touch with him ever since. I worked as one of the ringside photogs for our program sold to the fans and Jack had perhaps the greatest ever 10 minute broadway in Feb 1973 against Terry Funk underneath Sheik and Victor Rivera. They were the opening match if you can believe it, for a No. 1 contender’s tournament for Rivera’s America’s Title, which Terry actually went on to win.

Jack was a tremendously devoted husband to wife Jan. It helped that she shared his passion for traveling around the country, taking in major NASCAR events as well as some of the top amateur wrestling championships, which of course took him to Iowa almost annually. Jan told me in 2004: “It’s our way of getting some quality time together. I don’t get to see him all the time he’s at his body shop, but we try to make the most of all the rest of our time together, and we have the same things we like doing together. We love planning out our trips and were surprised at how much we enjoyed Las Vegas. Jack didn’t care for it too much during all those NWA meetings each year in the seventies. We especially love traveling around and seeing the U.S.”

Jack added: “Most of the time I was defending the belt or just being sent here and there, I never really got to see this country or Canada the right way during my career. Always on a plane and exhausted. Kiniski and (Dork Funk) Junior can tell you, and Harley. We were given insane schedules, and I dropped to Terry because like Bruno, I wanted out. That was enough and I asked Sam to take it off me many times. Now if I go somewhere to help support amateur wrestling and the NCAA, Dan Gable, whatever; I make sure we get to see the sites. Traveling is no longer stressful, but something I usually look forward to now.”

“About the only place I did make sure I took in everything I could was in Japan, which Jerry and I just loved going to. You couldn’t ask for nicer people over there and what a great promoter Baba was. A great man concerned about us, and who made sure we got the culture and could see how proud he was of his beautiful country. So I’m trying to make up for my regrets by finally seeing the sites and smelling the roses in the U.S.”

Jack loved fishing and just taking in nature. “I’ve always been an outdoorsy guy,” he said on my radio show on a conference call with Bruno Sammartino. They discussed their similar spinal injuries that almost paralyzed them, bonding them together further beyond their mutual respect for one another. “Bruno, we really never got a chance to meet properly, but I hope you know I always idolized you. You stood for a lot of great things, and have always shown the business respect and done it the right way.” Jack, at one of our few Cauliflower Alley Club events on the East Coast, told me in Tampa in 1995 that besides Bruno, Lou Thesz and Danny Hodge were his all-time favorites in wrestling. “They each had a lot of class and even more ability. They’re the very best and I’m not taking anything away from (Dory) Junior or Harley.”

“When I walked away from wrestling, or me wrestling, I just walked away. Just like that. I still loved the business, but after I finished what became my last match and saw that I was on WWF’s list for some other towns, enough. I just phoned in that I’d had enough and that I was physically and emotionally done. I was just so tired and ready to walk away and get on with the rest of my life. It was more than just my body aching. We all made so many sacrifices for all our time in it, being away from our families the main problem. Jerry still loved working, he wasn’t ready yet. I didn’t want to let him down because we’ve always been close, but that was it for me. I was lucky for all the time I did get to spend with Jerry on the road though. I can’t complain, I’ve had a great life so far.”