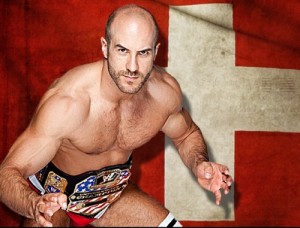 It took more than a decade before Cesaro made it to WWE after honing his skills competing for promotions around the world.

Those experiences helped prepare the Swiss superstar when opportunity knocked to work for the sports entertainment juggernaut. It has also kept him humble and driven, remembering where he came from.

The night after his monumental win he shocked fans by severing ties with Real Americans manager Zeb Colter and tag partner Jack Swagger in favor of Paul Heyman.

“It has been a great two years,” Cesaro said. “I started at the bottom and worked my way up. I think that shows hard work pays off. A good thing takes a while.”

Despite aligning with Colter, Swagger and now Heyman, Cesaro remains one of the most popular superstars. Colleagues such as William Regal and Cena have also publicly spoken highly of Cesaro’s ability. The past member of the Real Americans has earned the respect of the WWE Universe with each passing week.

“It comes with time,” Cesaro said. “If you constantly put in the hard work, you see the crowd starts to appreciate that. I think that’s why it’s so important to keep working hard every day and get better every day.”

Cesaro insists he never stops learning, going back to his days in Florida Championship Wrestling and NXT, WWE’s developmental program. After reaching some success in the singles ranks, he was paired with Colter and Swagger. The audience took to the “We the People” movement to the extent that maybe they didn’t even expect.

“You always hope,” Cesaro said. “It’s great that it actually happened. It’s something people can identify with. They saw me and Jack [Swagger] in the ring and saw we were really good at what we do. So it’s fun to watch.”

Another reason fans got behind the newest “Heyman Guy” is his signature move the “Cesaro Swing.” The maneuver involves the deceptively strong athlete taking his opponents by the legs and swinging them in multiple rotations. He applied the “Cesaro Swing” on the likes of the Big Show and Great Khali, which earned a big reaction.

“It’s a really basic move,” Cesaro said. “I’m a really big fan of the history of wrestling. The Giant Swing is a throwback. I used it prior to WWE quite a bit. One of the days I thought about bringing it back. It connected with the crowd. I’ve been doing it ever since.”