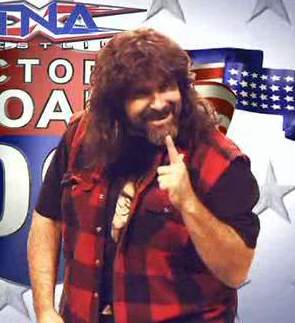 Mick Foley Discusses Why The Lockdown PPV Became The Centerpiece Of His New Book, The Differences Between His Six Sides Of Steel TNA World Heavyweight Championship Match Against Sting (At Lockdown 2009) vs. His Hardcore Match Against Edge (At WrestleMania 22) vs. His Hardcore Match Against Randy Orton (At Backlash 2004): The News Of His Life Being Turned Into A Feature Film, His Last Man Standing Match vs. “The Nature Boy” Ric Flair At TNA’s “Before The Glory” (And Why You May Not See Him In The $100,000 Battle Royal Gauntlet On iMPACT Next Thursday Night), Why “The Hulkster” Is The Last Person Left That He Would Love To Work With In His Career (And The Chances Of That Still Happening In TNA), His Response To “The Blueprint” Matt Morgan’s Recent Comments (That “No One Cares” About His New Book & That If Foley “Doesn’t Go Away That He Will Put Him Away”), Which Talents He Sees As The Future Of TNA, Why He Has Liked A Lot Of The Changes TNA Has Made (Including Those From Eric Bischoff & Hulk Hogan), If He Ever Envisioned His “Short-Term” Contract With TNA Turning Into “Two Years Later,” Why Matt Hardy Would Become “Revitalized” If He Eventually Chose To Come To TNA, The Distinct Advantage Chris Jericho Has With The Release Of His Second Book Over Mick’s “Countdown To Lockdown,” & The Recent Literary Advice He Has Given To Jim Ross

Mick joined The Big Mosh & “The Chairman of the Board” Todd Vincent in his debut on “Your Home of Wrestling Radio” (to preview the release of “Countdown To Lockdown: A Hardcore Journal,” his Last Man Standing Match against “The Nature Boy” Ric Flair on the “Before The Glory” live TNA iMPACT special on October 7th, along with TNA’s Bound For Glory Pay-Per-View on 10.10.10), which is now available in Windows Streaming Media or via Monday Night Mayhem’s official Podcast on iTunes:

Why the TNA Lockdown ’09 Pay-Per-View & his Six Sides Of Steel TNA World Heavyweight Championship Match vs. Sting was the main topic & centerpiece of Mick’s new book (Countdown To Lockdown): “I had reached an agreement with Grand Central Publishing to do a book, and I pitched it based on one chapter, which wasn’t a wrestling chapter. It was a chapter & outline, and then I was faced with the challenge of finding something to write about. I think it worked out well that I had this big match coming up, but my editor’s fear was that it was going to feel a lot like The Hardcore Diaries, and I said it was kind of designed to be a bookend because it is a similar structure, but the stories are completely different. I think it’s the first TNA book, and it is a big departure from WWE, and it’s a completely different story, and people are going to get to see comparatively how the two organizations work leading up to a big match. I’m lucky it was a really interested match for me, it was one that I had a lot of apprehension about, but fortunately it worked out really well.”

His reaction to the news of his life being turned into a feature film (produced by Union Square Media & American Original’s Jeff Katz): “I think the timing was pretty good here. I was worried that when I finally revealed what it was that people would go ‘O God, it’s just a movie.’ I think from what I’ve gathered, people do see that as a big deal. Statically, there’s not many people who have a deal for a movie on their life. I’m thrilled, because Union Square came up with an idea that I really felt could work, and the director’s very high on it, and Jeff Katz comes from a background in wrestling and has had so much success. The chances of getting a project off the ground seem so slight…this one looks likes it’s really going to happen.”

The differences between his TNA World Title Match against Sting (Lockdown 2009), his Hardcore Match against Edge (at WrestleMania 22), & his Hardcore Match against Randy Orton (at Backlash 2004): “With Randy Orton, it was like the one true comeback match. I said that everybody should get one comeback, everybody should come out of retirement for at least one big match, and I almost didn’t count WrestleMania the month before, because I kinda choked and was willing to settle on just being good enough. I kinda got intimidated, as I was out there in The Garden, there’s Flair doing the Flair strut, and I was like ‘I don’t belong here, I don’t belong here.’ After the match, I thought I could do way better than that, so when Randy & I had the big match in Edmonton, it really felt like that one true comeback match. After that, every match is at least partially about making money, so it loses that pure quality. The match with Randy was different, because it was really Randy’s first big high-profile match, and I think we both made the most out of that. With Edge, you had a guy who not at the top of his game character wise, but was at the top of his wrestling wise, and it was so clear that he was going to be a huge star. It was great to get him right before that last little peak. With Sting, you’re talking about two guys who were not at their physical peaks, but who had a history together and had the pressure of trying to provide the main event on a card full of cage matches. I know some people looked at it like it was two old guys moving slowly, but I think for most of our fans, they looked at it like two guys working really hard doing the best they could, despite their limitations.”

What should the fans expect from his forthcoming Last Man Standing Match with “The Nature Boy” Ric Flair next Thursday night on the live TNA iMPACT special (“Before The Glory”), along with his own personal thoughts about this potentially being his final career wrestling match: “At this point I don’t want to say anything’s my last match, because I’m kind of the boy that ‘cried wolf’ when it comes to that, and if the economy collapses again, I’ll probably make another comeback. I think Ric’s been on a roll, and I think when people see this promo in the ring on Thursday night, they are going to be really impressed and really feel like they want to see this match. I think we are going to work really hard, and hopefully bring the best out in each other, and put on the type of match that people can be talking about a few days afterwards.”

Mick’s reaction to Matt Morgan’s exclusive comments to Monday Night Mayhem that “no one cares about Foley’s upcoming book” (Countdown to Lockdown) and that “he should go away” or that Morgan is going to “put him away”: “Matt’s actually a huge reader, and I know he’s going to read the book. I think he’s trying to create interest, but I think he’s hurt because I said the biggest insult you could give a guy in the business is ‘He has a world of potential,’ and that’s what I said about Matt. It’s a very backhanded compliment, so I could understand why he might be angry. You need those types of things once in a while to bring out the best in somebody, and Matt still has that world of potential. It’s still not fully tapped. Matt’s a good talker, but listen very close because he’s really fast, so thanks for slowing it down so I could catch it.”

Who he believes can rise up the card and be the future of TNA: “I still consider The Motor City Machine Guns to be untapped stars. They’ve had the chance to have these incredible matches, and I don’t think there’s any questions that these are as talented tag team, along with Beer Money, in the business. I just hope they could keep the ball rolling and find a way to become main event personalities as well. In the book, you can see I’m a big fan of those guys, so I’m proud to see how well they’ve done since the book was written. Frankie Kazarian has really benefited from clipping the ponytail and becoming part of Fourtune. I think part of the challenge TNA is facing is they’ve had so many good wrestlers, but haven’t found a way to feature them in a way where they can breakthrough to the mainstream audience.”

More is contained in Mick’s highly anticipated first-ever appearance on The Monday Night Mayhem Radio Network including his candid thoughts & comments on if he would have foreseen his “short-term” contract he signed with TNA turning into “two years later,” why he’s liked a lot of the changes TNA has made in the company (including those from Hulk Hogan & Eric Bischoff), whether or not you will see him perform double duty on the night of October 7th at TNA’s “Before The Glory” live iMPACT special (and why, if he had the final call, he would wish to focus entirely on his Last Man Standing Match with “The Nature Boy” Ric Flair and not on the $100,000 Battle Royal Gauntlet), why “The Hulkster” is the last person left he would love to work with in his career (and despite Hulk’s current health status, why he hopes that can still happen in TNA), the distinct advantage that Chris Jericho has over him with the release of his second book (being released next February), why Matt Hardy would become “revitalized” if he would eventually choose to sign with TNA, the advice that he has given to Jim Ross if he decides to pen his first book, plus more details on the production of the forthcoming biopic on the life of “The Hardcore Legend.” Log on to Mick’s official “Countdown To Lockdown” blog (located at www.MickFoley.Typepad.com) for his complete schedule of forthcoming book signings in your city or town, and be sure to follow Mick right now on Twitter (at www.Twitter.com/RealMickFoley). Don’t miss three hours of Total Nonstop Action on Spike TV this Thursday: TNA iMPACT (featuring the confrontation 20 years in the making between “The Nature Boy” Ric Flair & Mick Foley going face-to-face) beginning at 9PM ET/8PM CT, followed by the hard-hitting docuseries TNA ReAction following at 11PM ET/10PM CT. For more information on TNA’s Bound For Glory Pay-Per-View (including ticket informatio and how you can be a part of the Fan Interaction in Daytona Beach), head on over to www.TNAWrestling.com.