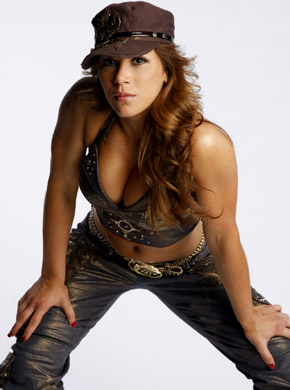 Mickie James doesn’t waver — at first. If she could perform a duet with any country music singer, it would have to be Tim McGraw.

No, wait, she’d have to consider Reba McEntire.

Then again, joining Kid Rock for one of his country-hybrid grooves would be unforgettable, too.

James, 33, blurts out those three names in 10 seconds, but her momentary indecisiveness is understandable. She had just finished a whirlwind morning car relay of country stations in her native Virginia to promote her second album, “Somebody’s Gonna Pay” (re-applying makeup in the car between visits). She was still being whisked around while mowing through a bevy of phone interviews — and most importantly, she was running behind on her coffee consumption.

Her one assigned task was picking up Starbucks for her traveling posse, a promise she just couldn’t get to. In the glory days of her first career, pro wrestling, such a newbie faux pas while “paying your dues” on the road could result in having to hitchhike to the arena (“Rowdy” Roddy Piper) or even being stabbed with a fork (“Nature Boy” Ric Flair, via “Dirty” Dick Murdoch).

On this day, though, James is merely the subject of some good-natured needling in the background as she recalls the details of her day. But make no mistake, the pressure to fly right is still ever-present. To fulfill her longtime dream of performing with country music’s elite, she must first impress those who spin the records, and James performed live on the air during her visits, a new experience for her.

“You’re hoping that you don’t hit a wrong note,” she explained. “You’re wondering what people’s perception is. But everybody was bopping along, so that’s a good sign, I think.”

James will be slamming, not singing, Friday night when she heads to the ring under the auspices of her “Hardcore Country” theme song to defend her TNA Knockouts Title against Velvet Sky as part of the promotion’s BaseBrawl show at MCU Park in Coney Island. “Somebody’s Gonna Pay” dropped on May 7, and James won back the title from Velvet Sky during the May 23 episode of Spike TV’s “Impact Wrestling.”

Since then she’s been on a routine worthy of Jerry Reed’s “Smokey and the Bandit” anthem, “Eastbound and Down.” In early June she commuted between Nashville and Atlanta so she could perform and promote herself at Music City’s CMA Fest while appearing on “Impact Wrestling” in Georgia. As with her wrestling career, she seems to be taking the Nik Wallenda no-net approach into her country music aspirations.

“I’ve always believed that I performed better under pressure,” James said of performing on live television and how she wants to translate that philosophy into singing live. “When it’s [taped], at least in the wrestling industry I find that my energy is not as full as it normally is. You’re still performing before a live audience, but sometimes it feels like there’s room to play or room for error. I want there to be no room for error. I want it to be perfect every time.”

That said, mastering a definitive country sound is much like nailing the perfect wrestling persona — it’s a process. And the themes in “Somebody’s Gonna Pay” offer some healthy experimentation, from Gretchen Wilson-esque empowerment in the title track and “Hurts Don’t It,” mixed with some Miranda Lambert-like recklessness in “Goin’ Fast” and “Best Damn Night of Your Life.”

She feels worlds ahead of where she was with her debut release, 2010’s “Strangers and Angels,” and has appreciated the support she has received, including TNA wrestler Magnus and fellow former WWE Diva Trish Stratus guest-starring in the “Somebody’s Gonna Pay” video.

James felt especially honored when Stratus made a point to compliment her during Stratus’ WWE Hall of Fame acceptance speech at Madison Square Garden in April — and was thrilled when Stratus shocked the world and brought the MSG crowd to its feet by announcing that she was pregnant with her first child.

James was asked whether Stratus’ announcement made her think more about eventually finding time for more personal pursuits. But James, who now has a July 21 album debut party in London included in her busy schedule, is willing to leave that up to chance for now.

“I have planned my whole future, my whole life,” James said. “And nine out of 10 times it never happens the way you want or plan or think it’s going to happen.”