Home / Columns / Mike Shaw dies of a heart attack at 53

Mike Shaw dies of a heart attack at 53 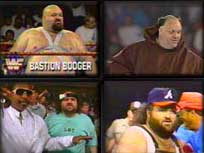 Mike Shaw was known for wrestling all over the place under many different names:

Dave Meltzer wrote: Mike Shaw, who wrestled under a number of different names including Klondike Mike Shaw (Vancouver), Jed Grundy (Mexico), Makhan Singh (Calgary), Norman the Lunatic (WCW) and Bastion Booker (WWF) passed away yesterday at the age of 53. Shaw’s death was attributed to being froma a heart attack. Shaw was Owen Hart’s leading opponent when he was breaking in, and as a new 400-pounder, his willingness to go up for slams and suplexes for Hart, which some at the time criticized, led to establishing Hart as a local superstar and making the fans see him, despite his size, as someone who could handle anyone. As Makhan Singh, he was the leader of the Karachi Vice and the company’s top heel for a time, which was the run where he made a reputation as a great talker and a good working big man, but never achieved that level of success anywhere else. He had some popularity in his WCW days as a lovable childlike character, although it had a short shelf life. In WWE, he was first given a controversial gimmick as a priest, Friar Ferguson before being named Bastion Booger, pushed as a gross character, where he worked mostly in prelims.

Related Items
← Previous Story Aloisia’s first interview at In Your Head
Next Story → AS I SE IT: Tips for Promoting Wrestling