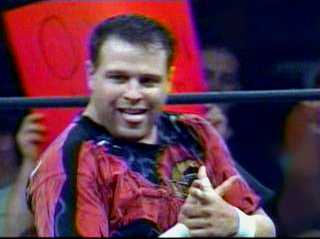 Jack and OIB welcome Mikey Whipwreck to the show. Whipwreck talks about being injured recently and recently had a MRI on his neck where he has some issues with discs. Whipwreck will be seeing the doctor next week and believes that he will need surgery. He doesn’t know if this means he wouldn’t be able to compete again, as several wrestlers have been told they wouldn’t be able to wrestle anymore but they did.

Whipwreck mentions that he has been avoiding TNA for several months. He talks about the Rob Terry incident where he took a unprotected chair shot and he didn’t like that. Whipwreck tells a story about Sabu where he told him that he tries to make it as real as possible, so he puts his hands up. Whipwreck refused to take chair shots from Balls Mahoney.

Whipwreck had no idea that ECW would become such a popular company. He says that ECW had to offer free beer and hotdogs just to get 150 into the building for a television taping! Whipwreck thought ECW was good for its cutting edge. However, he thought that when they went to the high spots and all that the company got worse.

Whipwreck got along with James Mitchell really quick and they would think of stupid things to do and would do them.

Jack asks if Tajiri could actually speak English. Whipwreck knows that Tajiri understood him and he could understand Tajiri. He does believe that Tajiri can hold a conversation in English. He got along with Tajiri very well.

Whipwreck hasn’t been at the ECW Arena since Hardcore Homecoming in 2005. Whipwreck says that the building has a completely different feel to it as their was television screens and stuff that TNA had brought in for the show in 2005.

Whipwreck watched his friends on the Hardcore Justice pay per view, but that was it. Whipwreck thought it was good, but then it was bad. He thought some of the guys look good while others look like crap. He enjoyed RVD/Sabu and Scorpio/CW. He didn’t like the dancing in the first match. He also didn’t approve of New Jack coming out and hug Team 3-D after brawling with them.

Jack asks Whipwreck about the ending of the show. Whipwreck didn’t understand why Dixie Carter was lifted onto the wrestlers shoulders and treated like a messiah.

OIB asks what was the greatest piece of advice Mick Foley gave him. “If your hurt and don’t feel like you shouldn’t work, don’t (work)”. Whipwreck thinks that is pretty ironic coming from Mick Foley. Something will always be nagging you in the wrestling business. Whipwreck had a great time in the ring with Mick Foley.

Whipwreck did read Mick Foley’s first book. He thought it was nice that he started off a chapter with him.

It was hard for him to go to WCW, at least from a financial standpoint. It was difficult emotionally because he started off in ECW and felt he was getting stale in ECW. Whipwreck says it was like a one year paid vacation when he worked for WCW.

Whipwreck was called on a Thursday and told he needed to work the WCW Uncensored pay per view with Billy Kidman and was told they had the best match. He proceeded to be buried on WCW television. He also talked to Jimmy Hart and asked if he should botch all his moves so he can get a push. Hart then said “like Evan Karagias?”. Whipwreck says Jimmy Hart is one of the nicest guys in WCW. Whipwreck talks about Hart wanting him to be apart of his Dungeon of Doom stable in WCW, but management never went for it. Whipwreck knows that he was buried because he and Kidman had a good match and Ray/Vincent were forced to follow that.

Whipwreck says that Bobby Heenan is his favorite person. Heenan asked Whipwreck if he can play around with his name, and Whipwreck had no problem with Heenan doing anything. Whipwreck says the highlight of his career was when Heenan shook his hand when he walked out to the ring on a Nitro. Whipwreck was told by Heenan in 1999 that WCW was a sinking ship.

When he returned to ECW some of the younger guys were mad that he was getting a push. Whipwreck was buried for a few months but he wanted to come back and work. Mikey put over anyone and everyone because he wanted to work. Whipwreck then was booked to be going crazy and was partnered with the devil (James Mitchell). They became a comedy act shortly afterwards. Whipwreck really enjoyed working with Tajiri and is his favorite tag team partner. Whipwreck talks about how they were booked as tag team.

Whipwreck didn’t have a hard time putting the triple threat and four way matches together. He didn’t like the match with Austin and Sandman as he thought it didn’t click well. He enjoyed the matches with Guido, Crazy and Psychosis.

Joel calls in and asks if ECW was the best time of his career. Whipwreck says that ECW was one big dysfunctional family. Whipwreck talks about ECW getting big to fast and believed that Heyman couldn’t do it all by himself. Whipwreck thinks that Ring of Honor may be similar to ECW trying to get things to work. Whipwreck is asked about the Benoit situation and says he doesn’t know what happened. All the times he worked with Benoit, he was nice to him and worked well. Whipwreck has had twelve concussions but doesn’t see himself going nuts.

Whipwreck loves Terry Funk and talks about Funk telling him he needs his knee replaced every six weeks or something to that affect. Funk told Whipwreck that he loves the business too much.

Whipwreck is asked about Justin Credible and he loved working with Credible. He was apart of the “fake Kiliq” with Credible, Jason and Lance Storm. Whipwreck wouldn’t take the top rope tombstone pile driver that Credible did to Jerry Lynn.

Whipwreck makes sure to point out he never shit his pants. He does believe that Little Guido shit his pants before. He did puke under the ring before because he broke his ankle at a independent show. He kept wrestling for ten minutes with a broken ankle!

Whipwreck doesn’t think he would have ever been able to work for the WWE because he wouldn’t be able to wrestle five times a week. Whipwreck was asked about being a trainer for FCW, but decided against it because he has a job right now that is good for him and has a family.

Jai calls in and asks Whipwreck about his thoughts on the Wrestler. He thought the Wrestler was very accurate. He never saw wrestlers take steroids in the locker room, but isn’t saying that it never happened.

OIB asks what Whipwreck hated the most about WCW. “Everything. Except for the paycheck and hanging out with Bobby Heenan.” Whipwreck says no one cared about the product and when he went to the television tapings their would be 85 people there and only 25 would be booked for the show. He also says that the shows would be booked as the shows were going on! Whipwreck was told what to do by three different people one night and did what the last person told him to do and got yelled at by other people!

Whipwreck goes into another story about Ric Flair. Flair had a blonde girl with him and another girl who was a gimp. Flair went into his room and announced they were going to ride Space Mountain! Whipwreck couldn’t believe what he was seeing.

Whipwreck brings up a meeting with Ted Turner executives. The meeting was about how everyone needs to be nice. Whipwreck says that Brian Knobs told people that Arn Anderson called him fat and everyone began to trade insults as no one took the meeting seriously.

Whipwreck is very proud of the guys that came out of his company who have done very well for themselves in WWE, TNA or even Japan.

Whipwreck says that Paul Heyman is a genius and believes that if Heyman would go to TNA he would be able to turn things around for the company as long as he didn’t have to worry about the budget. Whipwreck believes the focus should be on the younger guys, and not the older guys. Whipwreck and the IYH hosts talk about some of the things TNA has done where they may have dropped the ball.

Whipwreck believes that ECW could have done very well if they did the ECW One Night Stand style on the weekly television shows. He just believes that they wanted to kill ECW which he doesn’t understand since Vince McMahon owns the company!

Whipwreck shares his thoughts on the whole Nexus storyline.

Jack thanks Mikey Whipwreck for coming onto the show.

For more information on NYWC please go to www.nywcwrestling.com Bryan Danielson will be competing on September 11th!

To join the IYH message board go to http://inyourheadboard.proboards.com/index.cgi?