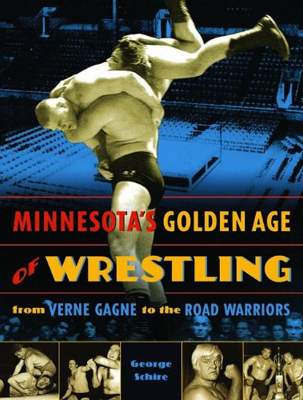 George Schire Discusses The Idea Behind The Release Of His New Book (“Minnesota’s Golden Age of Wrestling: From Verne Gagne To The Road Warriors”), The Legacy Of The AWA, Verne Gagne Going Into The WWE Hall Of Fame, & Vince McMahon Buying The AWA Video Library, & The Fatal Mistake In The AWA’s Demise

The author of the all-new book “Minnesota’s Golden Age of Wrestling: From Verne Gagne to the Road Warriors,” George Schire, was one of the special guests on this week’s live edition (05/31/09) of the award-winning Monday Night Mayhem. You can feel The Mayhem live every Monday night (at 7PM ET/6PM CT), exclusively on The Monday Night Mayhem Radio Network (www.MondayNightMayhem.com).

George joined The Big Mosh, Jimmy Noonan, & “The Chairman of the Board” Todd Vincent for his debut on “Your Home of Wrestling Radio,” which is now available in Windows Streaming Media or via Monday Night Mayhem’s official Podcast on iTunes:

The idea/concept behind the release of “Minnesota’s Golden Age of Wrestling” & his reason for writing the book: “I think the idea came from an 8-year-old kid 50 years ago, and that kid was me. I turned on wrestling and saw two guys by the name of Stan Kowalski & Tiny Mills beating some poor guy on All-Star Wrestling, and I was hooked, and for the rest of my life, they have had stranglehold on me. I collected the programs from every single card in Minnesota, from the first one in the early 50’s all the way to the very end, as well as every territory around the country. When wrestling was territorial, there were 30 different territories that all ran individually and had 3,000 wrestlers traveling around the roads like gypsies; every single wrestler of merit from that era went through the Minneapolis territory & the AWA at one time or another.”

What was the one fatal mistake for the AWA for it to go out of business: “In that old-school era, the promoters that ran the business & ran the territories, I don’t think most of them had the vision. A lot of them were getting up there in years, and you’re talking about guys like Verne Gagne, who was well into his 60’s at the time, you’re talking about Sam Mushnick of the NWA. You could talk about Jerry Jarrett, you could talk about any promoter, and these guys were of an older breed. Believe or not, it was their own egos that didn’t allow them to work together, even when they could have & should have, and when they did work together, none of them trusted each other because they were so used to the way their territories ran, where it was their backyard and no one else invaded it. They sort of self-destructed, so when Vince McMahon came in with this concept that ‘I could do Pay-Per-Views, and I could do cable television, and I could do all of this,’ all of these guys couldn’t comprehend the whole thing. Not that they didn’t think about it, they just didn’t have the ideas & wherewithall to do it.”

What will the legacy of the AWA be for years to come, especially after World Wrestling Entertainment’s purchase of the AWA video library & Verne Gagne’s induction into the WWE Hall of Fame: “I think it’s important, the fact that he (Vince McMahon) owns the video libraries of not just the AWA, but all the other territories, I hope he continues to use them and recognize that wrestling had a past. You have to know where it came from to know how you got to today. The memories: the fans still want to know about it, and that why I wrote this book. I wanted the fans to have a reflective look at the way it was, the way it became, & the way it is today.”

More is contained in this exclusive interview with George Schire, including his thoughts on Minnesota’s being the breeding ground for some of the most famous wrestlers in the history of the industry, the superstars that made their names/got their starts in the AWA, along with the comparisons & contrasts between the AWA vs. World Class Championship Wrestling. For a complete look back into the glory days of the AWA, along with a year-by-year history of the promotion from its inception to its closing, we strongly encourage you to purchase “Minnesota’s Golden Age of Wrestling: From Verne Gagne to the Road Warriors,” which is available right now at http://www.Amazon.com, http://www.MHSPress.org, or your favorite bookstores nationwide.

The award-winning Monday Night Mayhem (voted on by you, the fans as the “Show of the Year” in the 2009 & 2010 Wrestling Radio Awards) is sponsored by: Sizzlin Sauces (the official hot sauce of The Mayhem & the proud presenter of “The Hot Seat With Eric Bischoff” heard exclusively on MNM: http://www.SizzlinSauces.com), Ticket Relief (the official online traffic school of The Mayhem; register today for your simple & hassle-free defensive driving course and save 20% by using the promo code MAYHEM: http://www.TicketRelief.com), & B. Brown Video (where you can relive the moments & memories of professional wrestling’s rare & vintage moments: http://www.BBrownVideo.com).