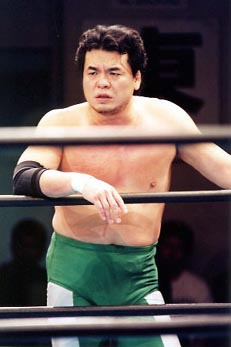 Mitsuharu Misawa died on Saturday night in Hiroshima, Japan after being dropped on his head during a GHC tag team title match (Misawa & Go Shiozaki vs. Bison Smith & Akitoshi Saito) at Green Arena. He took a high-angled back suplex at around 8:45pm. The ref asked Misawa whether he could move, and he responded by saying no, then a few seconds later he lost consciousness.

The match was stopped at 27:03 and all the NOAH wrestlers and officials came into the ring. A doctor was brought in from the crowd who tried heart massage as by then Misawa has stopped breathing. The heart massage brought back his pulse, and he was rushed to a nearby hospital. He was officially pronounced dead at 10:10pm.

Misawa, 45, was widely regarded as one of the greatest pro wrestlers of all-time. He was a successful amateur wrestler, placing fifth as a junior at the 1980 freestyle World Championships. He was trained professionally by Dick “The Destroyer” Beyer, Shohei Baba, and Dory Funk, Jr. He made his professional debut on August 21, 1981 for All Japan Pro Wrestling. From 1984 until 1990, Misawa performed as the second generation Tiger Mask, as All Japan had purchased the rights of the Tiger Mask gimmick from New Japan Pro Wrestling.

On May 14, 1990, during a tag match against Yoshiaki Yatsu and Hiromichi Fuyuki, he told his partner (and future rival) Toshiaki Kawada to unmask him, thus abandoning the Tiger Mask gimmick. A few weeks later, Misawa defeated Jumbo Tsuruta in his first main event at Nippon Budokan. The match at the time was seen as a turning point in the history of All Japan, with Misawa being established as a major star. For the rest of the decade he was one of the biggest draws in Japanese wrestling.

Following the death of All Japan booker Giant Baba, Misawa inherited the position of president. After disagreements with widow Motoko Baba and being removed by a board of executives in 2000, Misawa left All Japan Pro Wrestling; followed by natives Toshiaki Kawada and Masanobu Fuchi, and and two non-natives Stan Hansen and Maunakea Mossman to form Pro Wrestling Noah. Noah debuted on August 5, 2000, with shows that featured over 20 wrestlers that had resigned from All Japan.

On July 18, 2004, Misawa returned to All Japan to defeat Satoshi Kojima; he would also return once more on October 31, 2004 for the Keiji Mutoh 20th Anniversary: Love and Bump PPV, where he, along with Keiji Mutoh, defeated Hiroshi Hase and Kensuke Sasaki in what billed as a special dream match.

Up until his death, Misawa continued to wrestle a full-time schedule, competing mostly in tag matches. At the Nippon Budokan on December 10, 2006, he defeated Naomichi Marufuji to win his 3rd GHC Heavyweight Championship. On August 25, 2007 it was announced that Misawa would be on the November Ring of Honor Glory by Honor cards in Philadelphia and New York City. The first night, he teamed with KENTA to face Takeshi Morishima and Naomichi Marufuji, wrestling to a thirty minute time-limit draw. The following night, he successfully defended the GHC Championship against KENTA.

On March 2, 2008 Misawa was defeated by Takeshi Morishima for the GHC Heavyweight Championship, ending his 16-month championship reign.

Media outlets in Japan are reporting Mitsuharu Misawa’s death on Saturday night as a heart attack after being given a back suplex. The truth is nobody will ever know for sure as laws are different in Japan and his family has requested confidentiality on his cause of death.

A national Japanese TV show covered the tragedy in real-time. The footage is online at http://tinyurl.com/nvhpf3 (Please do not watch if you think you will be offended). In what can only be described as eerie, Misawa’s death came on the same night as The Wrestler opened in Japanese theaters, so the media over there are drawing the obvious comparisons to the suggestive ending of that movie.

WWE and TNA have led the tributes to Misawa.

“On behalf of WWE, we were deeply saddened to hear of the tragic loss of Mitsuharu Misawa. We extend our sincere condolences to his family, friends and fans. Misawa will be remembered as one of the all-time greats in Japan,” said John Laurinaitis, WWE Executive Vice President of Talent Relations.

TNA released the following statement on its website: “TNA Wrestling is saddened to hear of the sudden and tragic loss of Misawa.  He was respected around the world and he will be missed.  We pass on our sincere condolences to his family and those who worked with him in Japan.”

Indy wrestler Chris Hero, who is on tour with NOAH in Japan wrote in his
blog: “Words cannot express how deeply shocked I am. We’re all just in utter disbelief. Stunned sadness. The moments at ringside felt an eternity.  Never, in my life, have I wanted the fighting spirit to jump into someone’s being more than I wanted tonight. The fans chanted Misawa, Misawa, Misawa. They wanted their Hero to get up so f**king bad.
Just get up. Come on! You’re too tough for this. Too strong. I grabbed his boots and held onto them until they took him away. My heart goes out to his family. His students. His peers. His friends. His fans. His opponents tonight and his partner. It was a freak accident. No one is at fault.”

Zach Arnold of PuroresuPower.com wrote: “I started this site on June 20, 2000, right around the time that All Japan split up into two factions.
Misawa took the majority of the roster to form NOAH and would have a two-show event at Differ Ariake in Tokyo. At that time, it was unknown what would happen to the business. Historically in retrospect, the split didn’t really end the decline of the business. NOAH’s business declined over the last couple of years and that was solidified when Nippon TV cut ties earlier this year with Misawa. Once All Japan lost their Nippon TV deal, they were never the same. The same thing happened to NOAH. Where will the business go? I don’t know. Without TV support, it’s doomed.
Misawa was the 3rd generation ace in the industry (Rikidozan -> Baba ->
Misawa) and his death means not just the likely death of NOAH, but also a major collapse on employment in the industry. A part of every Japanese wrestling’s soul died today.”

“Misawa was a true warrior and one of my all time favorite performers.
His fighting spirit and superb psychology will be remembered as long as I will live.” — Chris Jericho

“Just read that Mitsuharu Misawa passed away while performing in Japan on Saturday night. A very sad thing to hear.” — Matt Hardy

“Shocked to hear of the passing of Mitsuharu Misawa. Was lucky enough to meet him at last year’s Tokyo Dome show. What a sad tragedy.” — Jeremy Borash

“Had some great matches with Misawa, so sad what a lost to our sport.”
— Gangrel

Jim Ross probably said it best in his blog today: “It’s a damn shame that the vast majority of American wrestling fans won’t give a second thought about the untimely death of ‘a Japanese wrestler.’ I encourage all fans to find DVD’s of Misawa and watch him in his prime, in the 90’s especially. If one is really serious about being a highly skilled, pro wrestler, then study the late Mitsuharu Misawa.”

For anyone looking for Misawa matches the following come highly
recommended: