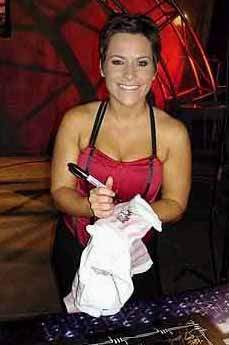 Nora “Molly Holly” Greenwald Discusses Why She Does Not See Herself Being Inducted Into The WWE Hall Of Fame, Responds To JR’s Comments About Women’s Wrestling/Gregory Helms’ WWE Release, If She Will Be Involved In The Forthcoming WWE Divas DVD Release, The Legacy Of Her “Hair vs. Title” Match vs. Victoria At WrestleMania XXV (And If Victoria’s Departure From WWE/TNA Success Surprised Her), The Return Of The Monday Night Wars, & The Chances Of Wrestlicious Succeeding

Former WWE Women’s Champion, Nora “Molly Holly” Greenwald, was one of the special guests on this week’s live edition (03/08/09) of Monday Night Mayhem (presented by ReelWrestling.com), hosted by The Big Mosh, Blade, & “The Chairman Of The Board” Todd Vincent. You can feel The Mayhem live & in streaming audio every Monday night (at 7PM ET/6PM CT), exclusively on The Monday Night Mayhem Radio Network (www.MondayNightMayhem.com).

The former Holly “cousin,” sidekick to The Hurricane (as “Mighty Molly”), & without a doubt one of the most recognized Divas in WWE history joined The Monday Night Mayhem Radio Network for her return to the airwaves of “Your Home Of Wrestling Radio.” As we count down the days to WrestleMania XXVI, Nora joined The Big Mosh, Blade, & “The Chairman Of The Board” Todd Vincent for an exclusive interview (to promote her forthcoming appearance at the Promolast Atlanta Reunion Pro Wrestling Fanfest (Friday, June 4th & Saturday, June 5th), which is now available in Windows Streaming Media or via Monday Night Mayhem’s official Podcast on ITunes:

The rumors of the forthcoming WWE Divas DVD release (and her potential involvement in the project): “I don’t know. They (the WWE) own the rights to my name & likeness, so whatever they wanted to do with my footage & stuff, they could do. My guess is in Trish’s (Stratus) segment, I will be the one getting pantsed a lot, so I’m sure I’ll be on there.”

Addressing comments in Jim Ross’ recent blog about the current state of women’s wrestling today. What is lacking in women’s wrestling that has prevented it from becoming legitimate, and will we ever see a women’s match headline a Pay-Per-View?: “I remember there was some mixed tags as a main event with Lita & Trish, and it was fantastic those girls got to be in the main event in a mixed tag. As far as them headlining a show, personally I have never met a girl as talented, charismatic, & athletic as people like The Rock, Triple H, or ‘Stone Cold’ Steve Austin. I’ve seen a lot of talented girl wrestlers, but none that had as much talent as the men in my opinion.”

How viable can Wrestlicious be in the world of professional wrestling: “The reason I think it (Wrestlicious) might work is there is so much serious drama on TV, and to have something totally ridiculous just might be a change of pace for people to escape their realities. It would great if it succeeded, and it could be one of those things like G.L.O.W., where there was just this sub-culture that was so drawn to it and was this thing that people talked about for years to come.”

If the time will come for “Molly Holly” to be inducted into the WWE Hall Of Fame: “I could not shine the shoes of those ladies in the Hall Of Fame now (The Fabulous Moolah, Mae Young, “Sensational” Sherri Martel, along with Wendi Richter). I don’t ever see myself being in the Hall Of Fame. Although I had a great career, I’m nowhere as talented & amazing as those ladies. I totally respect them, and I’m sure Trish, Lita, Chyna, & other girls did way more for the business than I did will hopefully be in the Hall Of Fame.”

Her thoughts on the return of the “Monday Night Wars” between the WWE & TNA: “I think that’s exciting as far as wouldn’t it be great if we could regenerate those ‘Monday Night Wars?’ I was in WCW when those wars first started, and I remember sitting in Eric Bischoff’s office watching Y2J (Chris Jericho) debut on RAW, and it was fun. So I think hopefully it’ll generate some interest. I think it’s gonna be a good thing for everybody, and I’m excited to see what happens.”

More is contained in this exclusive interview with the former Molly Holly, including Nora’s memories of working with “The Nature Boy” Ric Flair (and being a part of WrestleMania XXIV weekend, which saw Flair being inducted into the WWE Hall Of Fame & his final singles match against “The Heartbreak Kid” Shawn Michaels), her thoughts on Gregory “Hurricane Helms” being released by the WWE (and having the chance to team up with him as part of their respective superhero personas), if Victoria’s success in Tara in TNA after departing the WWE has surprised her in any way, along with the charity work she has been actively working on since leaving the business full-time. For more information on the forthcoming Promolast Atlanta Reunion Pro Wrestling Fanfest (including the entire guest lineup & ticket information), log onto http://www.PromolastEvents.com.