Roster for next SHIMMER DVD Tapings 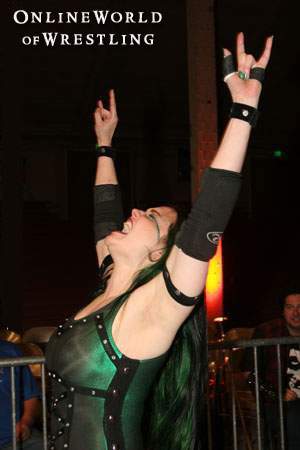 Eighteen talents have been announced thus far for participation in the April tapings. Over 25 of the top women athletes from around the globe will be a part of the festivities.

1. (SHIMMER CHAMPION) MSCHIF – “Your Soul’s Tormentor” MsChif captured the SHIMMER Championship on April 26, 2008 by defeating Sara Del Rey in the main event of Vol. 18. In the time since, she has been a marked woman, with all of the competitors on the roster gunning for her title, and the chance to boast of being the woman that put an end to the Reign of Torment. MsChif has successfully defended the SHIMMER Championship not only in SHIMMER, but also on cards promoted by Ring of Honor and Full Impact Pro. She has put away challengers Del Rey, Jetta, Mercedes Martinez, Rain, Daizee Haze, Ariel, Serena Deeb, Wesna Busic, LuFisto, Nikki Roxx, and became the first woman in SHIMMER history to pin Amazing Kong. MsChif faces a very difficult challenge come April, as she attempts to make it through four DVDs during the course of the weekend and walk away with the SHIMMER Championship still around her waist. Can the Reign of Torment make it to the two year mark, or will someone on th!
e SHIMMER roster make history by becoming the 3rd SHIMMER Champion?

2. (SHIMMER TAG TEAM CHAMPION) PORTIA PEREZ – Portia Perez returns to SHIMMER competition during April, after being forced to miss the Vols. 27 & 28 tapings due to being sidelined with the Swine Flu, or so she claimed. Allison Danger is one of those who questioned the validity of Portia’s illness, declaring that she was simply ducking another fight with Danger, and was afraid to be a fighting champion with her SHIMMER Tag Team Championship partner Nicole Matthews. In Portia’s absence, Nicole sent a message to Danger on Vol. 28 by cracking her in the head with one of the title belts, on Perez’s instructions. With the issue between Portia and Allison still unresolved, as well as the SHIMMER Tag Team Championship to be defended, Perez will be one frickin’ busy ninja come April 10th & 11th.

3. (SHIMMER TAG TEAM CHAMPION) NICOLE MATTHEWS – Nicole Matthews is unquestionably one of the top rising stars in women’s professional wrestling today. She has been able to not only achieve success in the tag team ranks by becoming the 2nd SHIMMER Tag Team Champions as part of “The Canadian Ninjas” with partner Portia Perez, but has simultaneously become a breakout star in singles action as well. Nicole’s series of matches against Daizee Haze displayed her rapid development as a competitor, which then continued with a tough battle against Cheerleader Melissa. Both of the Ninjas have the task of making it through the April tapings as SHIMMER Tag Team Champions, while also maintaining their respective positions in the singles picture.

4. CHEERLEADER MELISSA – Cheerleader Melissa is one of the rare few to have participated in every SHIMMER event to date, and is, without a doubt, one of the most skilled female wrestlers on the planet. Having achieved worldwide success in this industry, Melissa continues to show her dedication to SHIMMER, and the sport in general, by giving 110% every time she steps into the squared circle. After concluding a several year long rivalry with Wesna Busic in a very physical Knockout or Submission bout on Vol. 26, Melissa continued her winning ways at SHIMMER’s 4th Anniversary Celebration tapings. What is next on Melissa’s agenda?

5. SARAH STOCK – “Dark Angel” Sarah Stock made an immediate impact in SHIMMER upon her dramatic arrival in June of 2007. Stock was the International Wildcard competitor in the SHIMMER Title Tournament, shocking many by defeating SHIMMER main event stars Cheerleader Melissa and MsChif during her first and second round bouts. Stock later fell to eventual tournament winner Sara Del Rey in the third round, just seconds before the expiration of the 20 minute time limit. Sarah had a memorable series of matches against Daizee Haze during subsequent outings, a hard fought 2 out of 3 falls rematch against Del Rey, and a classic rematch against Melissa. We’re anxious to see “Dark Angel” back in the SHIMMER ring on both of the 4/10 and 4/11 events. What is on Sarah’s agenda in SHIMMER during 2010? We’re ready to find out.

6. AYAKO HAMADA – International superstar Ayako Hamada in many ways stole the show back at the SHIMMER 4th Anniversary Celebration in November of 2009. Hamada’s SHIMMER debut contest against Mercedes Martinez displayed Ayako’s technical wrestling proficiency, going hold for hold and strike for strike against one of SHIMMER’s most skilled. The second competitor to sign for a match against Hamada was Sara Del Rey, who perhaps got more than she bargained for when she opted to introduce a steel chair into the contest, causing the referee to throw the rulebook out the window and delcare the bout No DQ! Hamada and Del Rey battled all over the Eagles Club using everything they could get their hands on, and giving the fans in attendance what many of them called one of the wildest matches in company history. After Ayako’s second match at the “4th Anniversary Celebration” in November, the Berwyn crowd chanted, “Please come back!” They will get their wish on Sunday, 4/11, as Ayako Hama!
da will be back in SHIMMER competition (she is unavailable for 4/10 due to a prior commitment).

Freelance star AYUMI KURIHARA, as well as S-Ovation Co. Ltd. talents HIROYO MATSUMOTO, MISAKI OHATA, and TOMOKA NAKAGAWA will make their United States debuts on events promoted by both SHIMMER and JAPW during the month of April 2010. All four women have been a part of S-Ovation’s IBUKI events during recent years, under the guidance of Mariko Yoshida. Additionally, they have also competed on events promoted by companies such as NEO, OZ Academy, JWP, and Sendai Girls’ Pro-Wrestling.

11. MADISON EAGLES – Madison Eagles is one of the most skilled and impressive additions to the SHIMMER roster within the past two years. After her initial arrival during late 2008 along with tag team partner Jessie McKay as “The Pink Ladies,” Madison had two highly competitive singles outings during May of 2009 against Sara Del Rey and Mercedes Martinez. The matches were just a taste of what this nine year veteran of the sport brings to the squared circle. Lance Storm of www.StormWrestling.com wrote of the Madison Eagles vs. Sara Del Rey contest from Vol. 23 in an October 2009 web site commentary. Storm wrote, “The best match I’ve seen on the DVD, so far, featured Sara Del Rey and Madison Eagles. I’ve met Sara a couple times doing ROH appearances so I’ve seen her work, but Madison Eagles I’d never even heard of before. This match blew me away. This match featured some of the best mat wrestling I’ve seen this side of Bryan Danielson. These girls were AWESOME, these girls can !
WRESLE. I CAN NOT praise this match or recommend this DVD enough.” After being sidelined from Vols. 25-28, Madison Eagles makes her much anticipated return to SHIMMER action on April 10th & 11th in Berwyn!

12. JESSIE MCKAY – One of the newer SHIMMER athletes who really started to come into her own during 2009 is Jessie McKay. Unquestionably, Jessie’s breakout singles bout was her Vol. 25 match against Cheerleader Melissa, which caught the attention of everyone in attendance as she held her own against a main event level star in one-on-one competition, and nearly School Girl Crushed Melissa’s head into the front row. McKay had another strong outing against Sara Del Rey on Vol. 27, displaying her rapid progression as a professional wrestler. “Everybody’s Favorite Girlfriend” is determined to continue her climb up the SHIMMER ranks on April 10th & 11th.

13. SARA DEL REY – Former SHIMMER Champion Sara Del Rey was part of one of the most memorable matches in SHIMMER history at the “4th Anniversary Celebration” tapings against Ayako Hamada. Death Rey displayed during the course of that match just what she is capable of against one of the best world traveled stars to come out of Japan. Sara has yet to face any of the four additional joshi athletes who will be a part of the April SHIMMER events. Could she be looking to put her skills to the test against any of these rising stars from Japan?

14. ALLISON DANGER – Allison Danger, who recently celebrated the first birthday of her daughter Kendall, is still in search of a measure of revenge against the individual who threatened her well being and that of her child just over a year ago, Portia Perez. With Perez absent from the “4th Anniversary Celebration” tapings with a suspect “H1N1 doctor’s note” excuse, Danger settled for doing battle against Portia’s tag team partner Nicole Matthews. Danger’s night concluded with Matthews smacking Danger in the head with one of the SHIMMER Tag Team Championship belts. Matthews later declared that she did it at Portia’s request. With both Ninjas back in Berwyn on April 10th & 11th, Danger has the opportunity to meet Perez face to face once again.

15. DAIZEE HAZE – SHIMMER trainer Daizee Haze returns to active competition as a wrestler in SHIMMER action on April 10th & 11th, after serving in a troubleshooting referee capacity at our last set of tapings due to injury. The Haze has stated that she is hungry to get back into the mix against the top stars SHIMMER has to offer, with a particular interest in the joshi side of the locker room in April.

16. MERCEDES MARTINEZ – “The Latina Sensation” Mercedes Martinez is one of the women who truly put SHIMMER on the map during 2005 with her series of matches against Sara Del Rey. She has since gone on to have tremendous bouts against the likes of Cheerleader Melissa, MsChif, Amazing Kong, Serena Deeb, and Ayako Hamada, showing why she is considered one of the top female athletes worldwide. Though Mercedes has had opportunites at the SHIMMER Championship in the past, she has yet to achieve her goal of becoming the #1 woman in SHIMMER competition. Could April be Mercedes’ time to capture the gold? She must position herself for another title shot first in order to do so.

17. KELLIE SKATER – Bacchus Marsh, Australia’s “Rate Tank” Kellie Skater made her arrival in SHIMMER during 2009 and immediately took the microphone and proclaimed to everyone who would listen that she is indestructible. Despite her relatively small frame in comparison to some of the more powerful athletes on the SHIMMER roster, Skater’s warped frame of mind has earned her some very tough opponents thus far during her SHIMMER tenure, including LuFisto and Cheerleader Melissa. Come April 10th & 11th, The Rate Tank looks to add more wins to her SHIMMER record, amdist an ever-growing roster of talent from around the globe.

18. JAMILIA CRAFT – “Jumping” Jamilia Craft is the youngest graduate of the SHIMMER Wrestling Academy. Under the instruction of SHIMMER trainer Daizee Haze, Jamilia has been training regularly alongside the men at the Ring of Honor facility in Bristol, PA to prepare herself for active competition. Craft put in a strong showing during a recent non-title bout against SHIMMER Champion MsChif at the debut event for Pro Wrestling RESPECT in Burlington, NJ. On April 10th & 11th, Jamilia’s hard work and dedication pays off, as she officially becomes a part of the SHIMMER roster.
Front row seating to Saturday, April 10th is already SOLD OUT.

General admission seating to both April 10th and 11th is also currently available.

To secure your tickets online right now by PayPal, visit the link below.

If you would like to place a mail order for tickets (check or money order), E-mail [email protected] for mail order payment instructions.

A highlight video was thrown together by user TELPS from The SHIMMER Forum offering a preview of the four new joshi talents headed to SHIMMER in April: Ayumi Kurihara, Misaki Ohata, Hiroyo Matsumoto, and Tomoka Nakagawa.

Visit the link below to check out the video.

For the entire SHIMMER DVD section of the ROH web site, visit the following link…