By OWW Contributor on September 6, 2013@owwcom 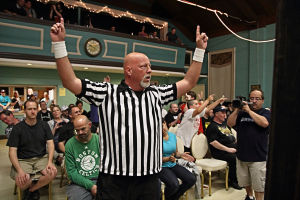 Paul Richard has seen a lot in the offbeat world of professional wrestling.

A Lynn resident, Richard is the general manager for New England Championship Wrestling. He comes by his position via a lot of rungs on the ladder. A student of the late Walter “Killer” Kowalski, he was the youngest referee in pro wrestling history. He then worked for the World Wrestling Federation (now WWE) … then to being the local promoter for the original Extreme Championship Wrestling … and was inducted into the New England Pro Wrestling Hall of Fame in 2010.

Richard’s current role with NECW promotion brings a new whole different kind of satisfaction. As NECW gets set to celebrate its 13th anniversary with BASH 13 on Saturday night at the Cove Community Center (19 East Corning Street, Beverly), Richard shared why this event is special to him.

“Sheldon Goldberg started this company in 2000,” Richard said.  “His idea was that if he could find the right up and coming talent, and give them good compelling stories to tell, you could attract a loyal local audience and eventually bring it to TV as a uniquely local enterprise.

“At first, I wasn’t sure that could be the case, but the company stayed around.  It wasn’t a raging success, but it survived and Sheldon often did innovative things, like being the first company to do an original weekly wrestling show distributed on the Internet in 2004, before YouTube, Facebook or the existence of social media.”

Richard became General Manager of NECW in 2009, when the company was making a strong move to get on television.

“I got the original ECW on TV in Boston market, and I knew that I could really make a difference here and put things over the top,” he said.

In August of 2009, NECW announced it was going to premiere on Comcast SportsNet New England starting in January 2010. The deal would have put NECW into a potential 48 million homes across the country by virtue of its availability on satellite TV. But it never happened. The week the show was scheduled to premiere, the network decided to pull the show. Instead, a deal was reached to put NECW on Comcast’s On Demand Service. Fans liked it, but the show had trouble attracting advertisers, and by 2010 it was off the air entirely and Richard decided to retire.

“We put in an enormous effort, but we got a bad break,” he said. “I thought that was the end, but Sheldon didn’t think so.

But thanks to an outpouring of support on social media, Goldberg reconsidered.

“I was touched beyond belief and at that point, I knew that somehow it would continue,” Goldberg said.”

The company started back up slowly in 2011. And this past spring NECW landed a deal for a weekly half-hour series on WMFP TV, Channel 62 in Boston (COZI TV) that premiered this past April 4 and airs at 12:30 a.m. Friday mornings. Much of th4 material is shot in Beverly.

Goldberg called Richard, “and he really didn’t have to say anything. What he put together is actually a a bigger deal what we had in 2010 because the show is available to 100 percent of the TV homes in the area.

“I could see it was going to start to snowball and he was going to need my help,” Richard said. “The other thing is that for the two of us, plus producer/director Bryan Nadeau (a graduate of Beverly High School), who puts the TV shows together with Sheldon and who was with us in 2010, this was unfinished business – a chance to redeem ourselves and to give the people a true local product on free broadcast TV as well as cable and satellite, along with reasonably priced, action packed live events that are affordable for families.”