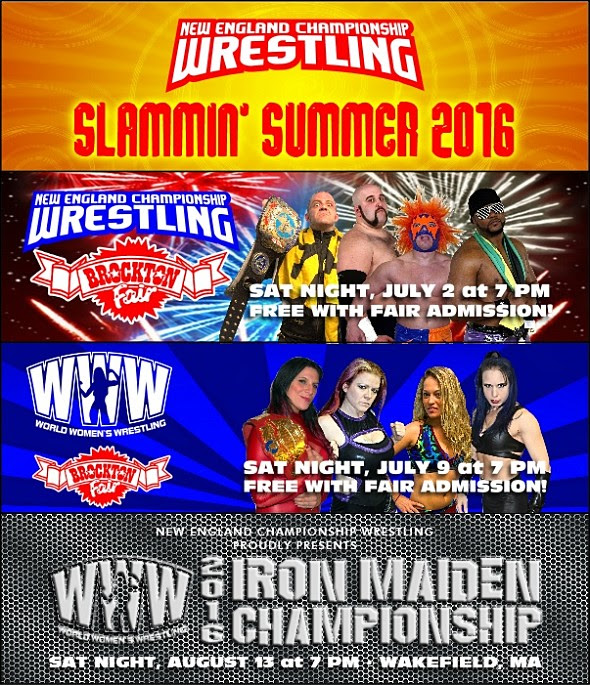 For information on the Brockton Fair including directions, visit their website at http://www.brocktonfair.net

Then on Saturday night, August 13, women’s wrestling history will be made as New England Championship Wrestling proudly presents World Women’s Wrestling’s 2016 IRON MAIDEN CHAMPIONSHIP. at the Americal Civic Center 467 Main St, Wakefield, MA with a 7 PM bell time.  This first ever special event is based on NECW’s annual IRON 8 Championship with similar rules.  Eight women will compete in 4 one on one matches with the 4 winners going to the final round – a 4 way, 30 minute iron woman match.  Whoever scores the most pinfalls or submissions in 30 minutes is the winner and the 2016 IRON MAIDEN Champion.  Participants include World Women’s Wrestling Champion, Nikki Valentine, Vanity Vixsin, Alexxis Nevaeh, Mistress Belmont, Tequila Rose, MJ Jenkins, Sonya Strong and Solo Darling.  This plus more to be announced.

Tickets for this history making event are $15 for adults, $10 for kids under 12 and are available now on our website by clicking here.