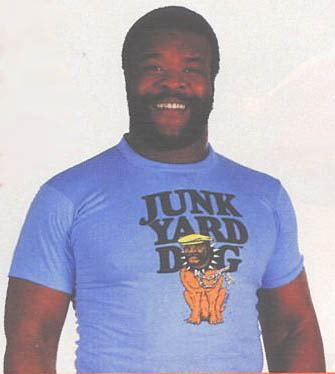 April 2, 2012. Toronto.Fourteen years after his tragic death on June 2nd, 1998, the publication of anew book aims to commemorate the remarkable life achievements of SylvesterRitter aka Junkyard Dog (JYD).

The King of New Orleans:How the Junkyard Dog Became Professional Wrestling’s First BlackSuperstar by Greg Klein (ECW Press, June 2012) is a fascinatingbiography that chronicles the early days of Ritter’s wrestling career,his most famous feuds as Junkyard Dog, the wrestling business back-stories, andhis life outside the ring to describe how JYD became an African-American idoland a household name.

Greg Klein, a New York-based writer, actor and producer, explains his motive toresearch and write the book is personal, “I went to school in the Deep South, and I am a student of the Civil Rights Era.The more I looked into the promoter’s decision to make JYD the star ofMid South, the more amazing I found it to be. This was the Deep South in 1979! It was an amazing decision and [Ritter] was anamazing man to be able to pull it off.”

The King of New Orleans isthe most complete portrait of JYD to date and is a fitting tribute to aremarkable man still fondly remembered in the hearts of wrestling fans. JYD will be inducted in to the Pro Wrestling Hall of Fame this year attheir 11th annual Induction Weekend, May 18th and 19th, in Amsterdam, New York.

Related Items
← Previous Story The Legacy of the Rock (by Joe L.)
Next Story → AS I SEE IT: Extreme Reunion dissappointment