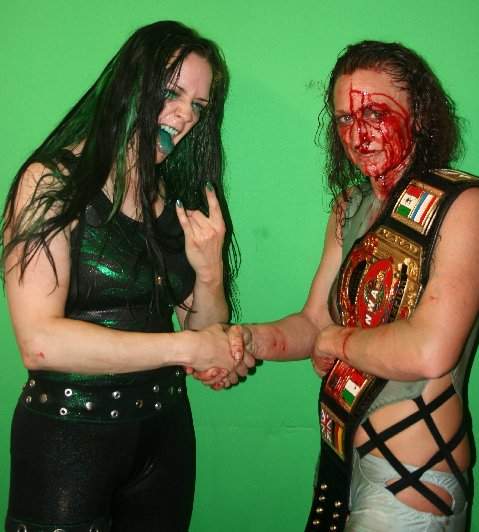 On July 24th in Lebanon, TN, MsChif defended her title against Tasha Simone. These two women battled all over the NWA Top Rope arena and then some, even going outside in the parking lot in a No Time Limit, No Disqualification match for the NWA Women’s World Championship.

As these two are no strangers to one another, a packed house of 225 people watched for 32:09 as these women brutalized one another back and forth. From being tossed down a flight of stairs to having their head busted open on a car hood nothing seemed to be out of reach for either competitor. Both women put everything they had into this match and then some.

In the end, these two fought throughout the arena and even through the concession stand, and finally back to the ring when MsChif sprayed green mist into Tasha Simone’s eyes, and everyone thought it was over. MsChif immediately ran for water at the concession only to surprise everyone when she washed Tasha’s eyes out. As the fans watched this happen you could hear a lot of fans talking wondering what MsChif was doing. As soon as the mist was removed, MsChif continued to brutalize Tasha, and finally MsChif gave Tasha one opportunity she will probably regret as Tasha dropped MsChif face first to the mat, and we saw a three count and a NEW NWA Ladies World Champion crowned.