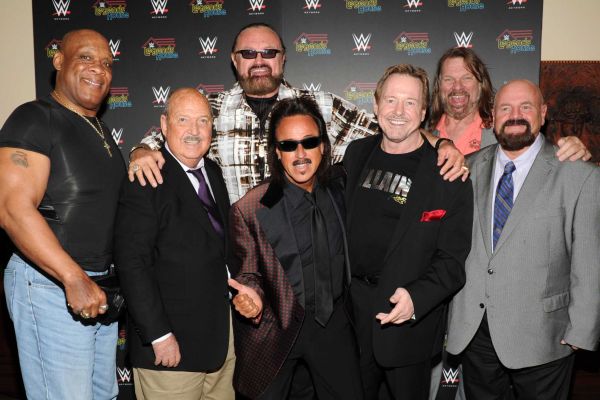 WWE hall of famer “Rowdy” Roddy Piper turned to “Hacksaw” Jim Duggan, and with a regretful expression on his face asked, “A little stiff, huh?”

In the ’80s this line might have been muttered in the corner during some tag-team match in Altoona, Pa., the term “stiff” referring to nailing someone for real within the staged combat of pro wrestling.

But this time Piper and Duggan were conversing between bites of salad at Smith and Wollensky steakhouse in Manhattan while watching a sneak preview of the new WWE Network series “Legends’ House” with media members. The series premieres Thursday at 8 p.m.

During the debut, eight WWE legends — Piper and Duggan are joined by Tony Atlas, “Mean” Gene Okerlund, Pat Patterson, Hillbilly Jim, Jimmy Hart and Howard Finkel — meet up at a house in Palm Springs, Calif., for weeks of “Real World”-style bonding. To stir the pot early in the proceedings, the cast is summoned outside by a gong and is surprised to find Hollywood star-turned-troubled soul Gary Busey offering a healing meditation session.

The next shot on the preview is Piper recalling the introduction in a one-on-one interview, wondering why Busey was there. Piper quipped whether Busey was there to teach them how to ride motorcycles, a reference to the 1988 accident that left Busey critically injured.

That line prompted Piper’s lunch-table lament to Duggan, and the “Hot Rod” looked down toward his plate more than once until the preview was finally over. The shock of seeing recorded thoughts and actions you’d like to take back is exacerbated a bit in this case. The show was shot early in 2012, and sat for two years while WWE Network was looking for a home, eventually settling on an Internet-based subscription service.

The cast had not seen the full episode until viewing it with the press Tuesday, and didn’t know who their castmates were going to be until they got to mansion formerly owned by Harpo Marx.

“First thing, I’m uncomfortable,” Piper admitted seconds after the viewing when asked his immediate reaction. “There are some things I forgot — [grimaces] — uncomfortable.”