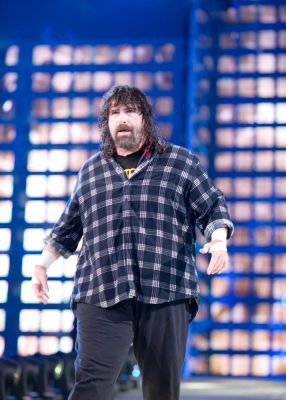 When notorious squared-circle spendthrift Mick Foley takes a baseball bat to fully functioning electronics, you know something isn’t right with the world.

But the three-time WWE champion and 2013 Hall of Fame inductee couldn’t help it after he felt WWE Superstar Daniel Bryan was unfairly excluded from last Sunday’s Royal Rumble PPV match.

Foley used social media after the pay-per-view to say he was going to put a brick through his television set, out of real-life frustration over Bryan and other WWE Superstars Foley says aren’t being given a chance to reach the next level. (Newsday reported on Foley’s dissatisfaction with WWE’s creative direction Tuesday.)

After some negotiating with wife Colette, it was agreed that the carnage would best take place outside their Smithtown home.

With a camera rolling for posterity and Foley using a bat former Yankee Sal Fasano autographed for one of his sons, Foley put the set out of its misery. The video has been viewed more than 100,000 times since it was posted Tuesday.

Foley was asked via text message if giving the TV the business finally made him feel better.

“A little bit, but once the family forbid me to do it live, or in the house, the act lost most of its power,” Foley told Newsday Thursday. “But technically, I did break a TV in protest — even if my swing lacked a follow-through, a habit developed through hitting thousands of fly balls to my son in our backyard — where a follow-through would have meant pulling the ball to left, into the neighbor’s yard.”