Home / TNA / Newsday.com reports that the Toby Keith and Jeff Jarrett camps are tight-lipped on a possible partnership

Newsday.com reports that the Toby Keith and Jeff Jarrett camps are tight-lipped on a possible partnership 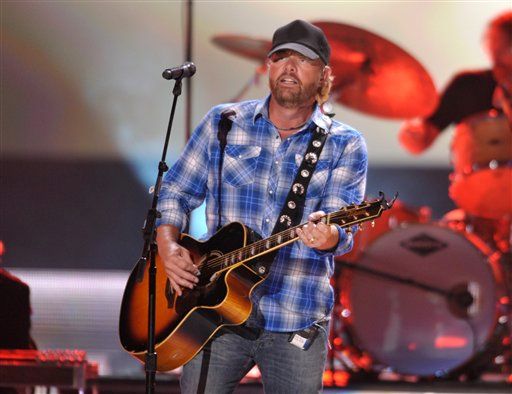 Rumors of a partnership between country music superstar Toby Keith and TNA Wrestling founder Jeff Jarrett to start a new pro wrestling promotion have swirled online since shortly after a report last month by The Wrestling Observer newsletter that said Keith had unsuccessfully tried to purchase TNA.

While others have quickly denied interest in buying TNA or joining an effort to launch a new company, Jarrett and a publicist for Keith have neither confirmed nor denied the reports when contacted multiple times this month.

On Jan. 14, Jarrett said via email that he wasn’t doing any interviews right now. On Wednesday, he again declined an interview request via email, but added, “I can tell you I’m making good progress, so, stay tuned!”

Jarrett announced last month that he would leave TNA. Texas-based Panda Energy is the majority owner.

Keith’s publicist, Elaine Schock, said earlier this month that she had no knowledge of a partnership between Keith and Jarrett. When asked again on Jan. 13, Schock responded to Newsday via email, “I still have not heard anything that I can confirm.” On Tuesday, Schock said that she had nothing to add.

Previously, a publicist for Smashing Pumpkins lead singer Billy Corgan said in an email to Newsday last November that reports of him purchasing TNA were “rumors” and that he was focused on his Chicago-based independent promotion. And earlier this month, former WWE announcer/executive Jim Ross used his blog to deny reports that he would work with Keith and Jarrett on a pro wrestling project.

But Jarrett confirmed via his verified Twitter account that he arrived in Los Angeles on Jan. 13 for three days of meetings, after tweeting in the previous few weeks about all the hours he was putting into a new project with wife Karen. He used the hashtag #passionforwrestling in one tweet, and in another said, “An old friend from Old Trough, Texas once told me as it relates to the wrestling business… ‘If you don’t know where you’ve been, you’ll never know where you’re going’ … So true…”

After returning from L.A., Jarrett tweeted, “Back in Hendersonville [Tenn.] … Great 3 days in Hollywood… Time to analyze, digest all the info, and make some decisions…”

On January 23, Jarrett tweeted, “Spent the morning doing one of the things I really love about this business…Watching good independent talent…There is a LOT out there…”

And on Monday, Karen Jarrett on her verified Twitter account tweeted about looking for office space in the Nashville area.

In the 2009 documentary “Jeff Jarrett: King of the Mountain,” Jarrett noted that longtime friend Keith turned down the opportunity to play for President George W. Bush because he had already agreed to appear on TNA’s 2002 debut episode, which appeared on pay-per-view. Jarrett interrupted Keith’s rendition of “Angry American,” leading to Keith becoming an impromptu entry in the battle royale for the NWA title. Keith ended up suplexing Jarrett before teaming with Scott Hall to eliminate Jarrett by throwing him over the top rope.

Keith’s business acumen was chronicled in a June 2013 feature in Forbes. The magazine estimated that the singer made $65 million in the 12 months leading up to the article, and has amassed $500 million in career earnings. Keith has scored with such diverse holdings as a record label, a mezcal liquor brand and a restaurant chain.

A potential Keith/Jarrett project comes on the heels of WWE’s announcement on Jan. 9 that it would offer a 24-hour network streaming online beginning Feb. 24.

After the announcement Jeff Jarrett tweeted, “Congrats to @WWE @WWENetwork @VinceMcMahon on tonight’s announcement! GREAT for the business we all love… #passion #perseverance #persistent”.