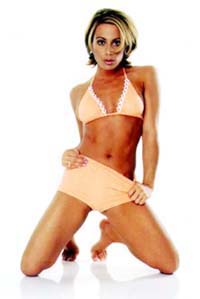 Former WCW Nitro Girl Spice, Melissa Grill Petersen, was one of the special guests on this week’s live edition (07/26/10) of the award-winning Monday Night Mayhem (presented by Good Health Natural Foods). You can feel The Mayhem live every Monday night (at 7PM ET/6PM CT), exclusively on The Monday Night Mayhem Radio Network (www.MondayNightMayhem.com).

Melissa joined The Big Mosh, Jimmy Noonan, “The Chairman of the Board” Todd Vincent, & “Wild” Bill Brown for her debut to “Your Home of Wrestling Radio” (to promote the WCW Nitro Girls Reunion at the forthcoming 2010 NWA Legends Fanfest in Charlotte, NC), which is now available in Windows Streaming Media or via Monday Night Mayhem’s official Podcast on iTunes:

Having the opportunity for Spice to reunite with Tygress & Fyre for a Nitro Girls reunion next weekend in Charlotte for the 2010 NWA Legends Fanfest: “I am lucky to say that I have stayed in very close contact with the girls over the years. We all live relatively close so we make sure that a couple of times a year, we get together, and we are pretty close parts of each others lives. I’m even more excited to see the fans, because I had the opportunity back in November to do a show up in New Jersey, and some of our most loyal fans that used to come to every show in the Northeast came to that event. When you’re out of it for a minute, you forget the dedication that was there every week, week after week. I’m looking forward to some more of that again next weekend…it’s gonna be great.”

What she liked and/or disliked about the direction of the Nitro Girls and the transition of being just dancers to in-ring performers & valets: “I think it was a shame because it was such a popular concept. I think it was an element that’s really been missed. We still hear it from the fans all the time on Facebook. People reach out to us all the time and say ‘Man, we really missed the Nitro Girls.’ When the group was created, Eric Bischoff was saying that valets were a thing of the past and that they wanted to move things in the right direction. I always remember that opening night. The response was tremendous, and it continues 13 years later. On one hand, I think it was just wrestling on a whole was remise to not continue with that concept in some form or fashion, because the fans really enjoyed it. Then at the end of the day, everything changes. I think they could have still differentiated themselves, but I think the problem WCW made is that they tried to be like the competition. When they tried to play the same game as WWE, they couldn’t hang, because Turner was a whole different media outlet, and we had a lot of restrictions.”

The likelihood of a complete Nitro Girls reunion at WrestleMania XXVII in Atlanta (the home of WCW) and whether or not she could actually see that taking place: “It would make phenomenal sense. A lot of are still pretty accessible to the area. We would all be completely open to it. Two years ago, we did a reunion for Jimmy Hart down in Orlando. Five of us got together, did a choreographed routine in the ring, and the fans loved it, and it was a ton of fun. So if there is interest from the fans, I think it would be great.

Check out what Spice has been up since leaving the wrestling business by listening to her exclusive interview on “Your Home of Wrestling Radio.” Dr. Melissa Grill Petersen is now the owner & developer of Flow Unlimited, a Living Wellness Coaching & Consulting Company dedicated to energizing, educating, & enlightening people on their journey of optimal healthy living. Take advantage of Flow’s services, programs/workshops, & product line by heading on over to her official website (located at www.FlowUnlimited.com). For ticket information, featured legends/vendor guests, & the schedule of events being held the weekend of August 5th-8th in Charlotte, NC, be sure to log on to www.NWALegends.com & www.BBrownVideo.com. Your chance to meet Jim Ross, Bobby “The Brain” Heenan, “The Million Dollar Man” Ted DiBiase (w/Virgil), Terry Funk, Dory Funk, Jr., Sting, Shelton Benjamin, Mickie James, “The Franchise” Shane Douglas, & many more is just days away! Don’t forget that TuCold Video, B. Brown Video, & Mayfield Mayhem proudly bring you the WCW Nitro Girls reunion (Spice, Tygress, & Fyre) on Saturday, August 7th (from 1-3PM ET