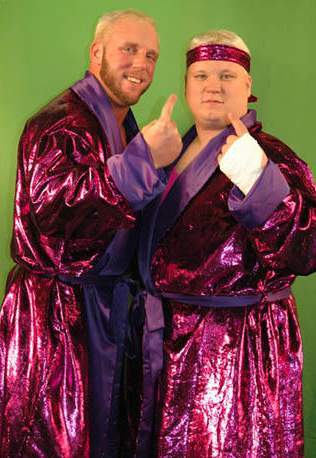 Disclaimer:
The National Wrestling Alliance does not sanction cage matches, chain matches, bull rope matches, strap matches, “lights out” matches, taped fist matches, Texas or other designated “death” matches, or any other events in which the rules and regulations designated herein are not fully enforced. Wrestlers participating in non-sanctioned events do so without recourse to the NWA in the event of injury.

Mike Easom and Steve Madison have a tremendous hatred for one another and have battled many times before and nothing has ever been settled. In fact the hatred has only multiplied and their matches have become much more dangerous. We feel that this match will be no different and therefore we must protect ourselves legally. The NWA understands the hatred between these two men and although this match may very well take place the NWA WILL NOT sanction this match.

The Sheik has been destroying competitors all over the country and recently picked up the NWA NA Title after defeating “EL Gran” Apolo in Ft. Pierce, FL on 1/30/10. Recently the Sheik defeated the first Unified Universal Champion in Puerto Rican History – “El Rebele” Noriega in Chicago, IL. Does the Sheik have what it takes to retain his NWA NA title against a world class athlete such as Big Vito LoGrasso? Vito has wrestled all over the world competing for ECW, WCW and the WWE. This match may be the biggest test yet for the Sheik.

You can’t say Tampa wrestling without mentioning Buck Q and Mike Sullivan. These two technicians are greatly responsible for putting modern day Tampa wrestling on the map. Anytime either one of these gentleman step foot in the squared circle you are almost guaranteed to see a mat classic…put them against one another and it makes for a can’t miss match. This one could undoubtedly steal the show, and with this great line up on March 6th, that is saying a lot!

Craig Classic has a new attitude since returning from Japan and will do whatever it takes to keep his title. Christopher Gray has recently returned to NWA Pro Wrestling FUSION on 1/30/10 after an 8 month absence and wants to climb back up the ladder. Gray is not the number one contender to the NWA Florida Jr. title but he got the spot when the number one contender, TJ Perkins, was destroyed by Classic at “Pandemonium At The PAL” in Ft. Pierce. TJ could not make this show due to injury.  Christopher Gray already holds a victory over Craig Classic, one can only wonder if he can do it again and capitalize on this amazing opportunity?

-Grudge Match-
Bobby Buthol -vs- Michael Patrick
On August 1, 2009…Bobby Buthol brokered a deal with our Florida office so that he and the tag team of Michael Patrick and Moonshine McCoy could compete at our Temple Terrace Event. What he didn’t realize is they would all be competing against the MAMMOTH Shane Twins in a handicap tag team match. Even though it was three -vs- two, the odds were definitely stacked against Buthol, Partick and McCoy. Buthol brokered another deal for a match on the September show. As he came out with his team of Patrick and McCoy he dressed them down in front of the huge capacity crowd followed by double crossing them. Buthol tried to get a new tag team to destroy Patrick and McCoy only to come up short once again. Now on March 6th there are only two questions to answer, will three times be the charm or will it be the final strike?

Ciatso and Double Deuce consider Tampa Florida their old stomping grounds, mainly because they have a history of destroying competition and stomping on the dreams of their opponents. Moonshine is also from Tampa and has big plans to mark his territory. Does Moonshine have what it takes to defeat Francisco when the deck is so stacked against him? Only time will tell.

-Opening Contest-
Kazuchika Okada -vs- Tommy Taylor
This opening contest should be amazing as New Japan Pro Wrestling’s Kazuchika Okada takes on England’s Tommy Taylor in what should be a fantastic technical wrestling match from two incredible international superstars. Taylor is the #1 contender to the NWA FLORIDA Heavyweight Title and Okada wants to make an impact at his debut.