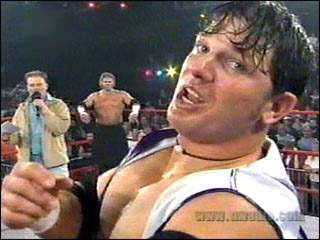 “The Phenomenal” AJ Styles vs. Ricky Reyes
As people may have heard before, due to unforeseen circumstances Cody Deaner is unable to be at this event so Upstate officials went ahead and signed Ricky Reyes to replace him. The Havana Pitbull has been on a roll here in Upstate since his debut and will look to further his climb up the ladder with a win over AJ Styles. We saw what happened to McChesney as a result of Reyes’ Dragon Sleeper. Will AJ suffer the same fate? One thing is for sure, this match is sure to be Phenomenal.

Pepper Parks vs. Sabian
Pepper has been on the winning side of things for months now and he will look to continue his hot streak against none other than “The Black Jesus” Sabian. Sabian has only been to Upstate on one other occasion and he came up short against Ricky Reyes, so he will obviously be looking to avenge that loss. This could be the sleeper match of the night.

The Star Foundation vs. Triple X, Super Assassin, and Mastiff
With John McChesney on a hiatus after the beatdown he received last show, Starrider has stated that he has called in some reinforcements and issued an open challenge for 6 man tag action. Triple X and Super Assassin were quick to accept this big challenge and have informed us that their partner will be the returning MASTIFF, most notably from Upstate’s sister promotion NWA Empire. Both teams are looing to step it up big at the biggest show of the year so this one is sure to be a fight to say the least.

Non-Title 3 Way Tag Team Match
Dunn & Marcos vs. The McCloud Brothers vs. NWA Upstate Tag Team Champions Rhythm & Booze
These 3 teams have been at each others throats for months now trying to prove who the top tag team in the area is and now we will finally get a chance to see them all in the ring at once! Although R & B have refused to put the titles on the line in this one, stating they have already beat both teams, this one will need to be seen to be believed. After what we saw in the Lynchberg Death Match a few shows ago and the attempted hanging of the McClouds last show by R & B, there is no telling what these teams may try and do to one another.

Sara Del Rey vs. Portia Perez
Unfortunately, Awesome Kong was pulled from this event by TNA for a house show. So Upstate has gone out and found a very suitable replacement to take on the SHIMMER champion. So now it will be Portia Perez taking on Del Ray in the first women’s match in quite some time here in NWAU and these two women are going to make sure it’s not the last.

NWA Upstate No Limits Title Match
Cheech (c) vs. “The Bull of Black Mountain” Gabe Saint
Saint and Cheech have had a long running series of matches now and they just seem to get better and more competitive each time. Gabe, with a change of heart over the months finally embracing the fans of upstate that truly respect his hard work will look to finally get that big win he’s been looking for and prove he’s the next breakout star. Cheech has gotten more noticeably cocky as of late saying Gabe is a great wrestler but not good enough to beat the man who has held No Limits championship for over a year. With their last encounter ending in a count out, this final encounter will have relaxed rules. Meaning no one will be counted out and there will be no time limits, these two men will fight until there is a clear winner.

Casket Match
Dewey vs. Dustytaker
These two have been having feuding for quite some time now with Dusty going undefeated in the series. At February Fallout, Dusty had a match with a debuting Kayfabe Dojo student, Nick Ando. Dewey ran out and distracted Dusty and Ando rolled him up with a hand full of tights for the win. Dewey then continued the beat down on Dusty and challenged him for one more match. Dewey even said he would beat Dusty at his own game, The Casket Match. Can Dewey finally get the win over Dustytaker or will the Dead Man Reffin’s win streak over Dewey continue?

NWA Upstate Heavyweight Title Match in the Steel Cage!
Jimmy Olsen vs. Danny Doring (c)
This all started back at the Indytational Tournament last year when Jimmy scored the upset win over Doring in the second round. Doring did not take kindly to this, and was even more upset when he couldn’t secure a rematch for the next show. Instead he demanded a match against Jimmy’s brother, Colin. Not only did Doring win that match but he even tried to injure Colin after the fact, all the while calling him Jimmy. Later on that night Doring made his precense known again disrupting Jimmy’s title defense against John McChesney. After Doring was once again unable to defeat Jimmy in a 3 way (w/ McChesney) he finally received his one on one rematch, after saying if he lost he would leave Upstate for good. It seemed Jimmy had Doring’s number once again, when out of no where Big Cat Lemmer ran in and layed out Jimmy to help Danny win the NWA Upstate title. A plan all along it would seem, but now these two men will enter the steel cage, where no one can interfere, to settle the feud once and for all.

Speaking of “The Notorious BCL” Big Cat Lemmer, he will also be in the house looking to destroy anyone or anything that stands in his path. We’ve received word that he has issued an open challenge to anyone who thinks they can stand a chance against him.

We also know that the team of CloudLee, Brodie Lee and Cloudy, are signed to be in the house as well. We’ve seen these two become increasingly more angry over the past few months and after 2 huge singles losses last show, there’s no telling what they will be looking to do on 5/17.

All this and MORE surprises and match ups to be announced that night, at NWA Upstate’s 4th Anniversary show on May 17th! Don’t miss what could very well be Upstate’s best event yet!