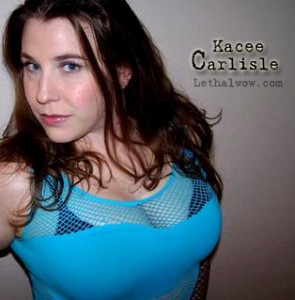 On Saturday, November 17th, current NWA Women’s World Champion Kacee Carlisle (also ranked #7 in this week’s PWI list of the Women’s Top Ten), will be making her first title defense THIS Saturday in Bayville, NJ for the NWA Coastal promotion.  Her opponent is a top NWA Women’s Champion in her own right, as she will be facing the very popular NWA Ring Warriors Battling Bombshells Champion La Rosa Negra.  Carlisle recently won the belt from long time NWA champion Tasha Simone in a hard fought battle, and this match will be no different.

See Kacee speak to the challenger about her title defense at:
http://http://www.dailymotion.com/video/xutl8e_kacee-carlisle-on-battle-for-bayville_sport#.UKROuIblOQ4

This match is part of a larger card that will also feature a NWA Coastal Heavyweight Championship Title defense as Bad Boy Danny Pagan will be facing Jersey Shore legend and number one contender for the title “The Phat Daddy” Biggie Biggs.  When these two met last month, Biggs got the win but not the title, due to interference from Pagan’s backup group known as the Boardwalk Mafia.  Commissioner Tommy Cairo has banned that group from ringside, and this match is now a no DQ, falls count anywhere match.

This show is being taped for later broadcast by NWA on Fire for the new NWA TV show that is currently airing on ME-TV.

NWA Coastal has rolled back pricing for this show to $10, in an effort to encourage local residents whose homes & apartments were ravaged by Hurricane Sandy to take a break, and enjoy a fun night of pro wrestling like the Jersey Shore has not seen in some time.  More important, kids under 5 are admitted FREE!

Tickets are available in advance at the Bayville (NJ) Elks (247 Atlantic City Blvd.) or online at http://brownpapertickets.com.  Remember the date, November 17th, with a 7:30 pm bell time.