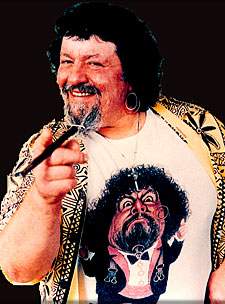 National Wrestling Superstars made its first appearance at the Woodbridge, NJ Elks Lodge in over three years on Friday night February 19th, and this return was extra special as NWS presented its annual J-Cup Tag-Team Tournament, which this year was re-christened as the Captain Lou Albano Memorial J-Cup Tag-Team Tournament, in memory of the late great WWE Hall of Fame wrestler and tag-team manager extraordinaire. The Woodbridge area fans certainly gave a hearty welcome to NWS and the tournament, as a near-capacity energetic Friday night crowd filled all sides of the building to cheer on their favorite teams.

Before the show began, NWS ring announcer Johnny Falco introduced Captain Lou’s niece Kami Albano, and explained the rules of the tournament. Eight teams would compete in a single elimination tournament. The first and second round matches would be ten-minute time-limit matches, with a five-minute sudden death overtime, and if no winner emerged the fans would choose the winner. The final match would be no time limit, one fall to a finish.

In the first round of the tournament (the matchups were determined by random drawing):

* The BS Express defeated Team Moore Than Too Hot (Devon Moore & “Too Hot” Steve Scott). The Express’ power and the high-flying abilities of Moore and Scott made for a well-matched opening contest. But power won out, as The Express put out Scott with a spiked RKO then planted Moore into the mat with a double-facebuster for the 1-2-3. All four men shook hands in a show of sportsmanship after the match.

* The Cold-Hearted Playas (Danny Demanto & Vicious Vinny) defeated Team Title Holders (NWS Tag-Team Champion Corvis Fear & NWS Jersey Shore Champion Myke “G.Q.” Quest). This was the first official match for this unlikely duo of former bitter enemies, and the fans certainly let Vinny know how they felt about his turning his back on them. Fear and Quest had no intention of rolling over for them, and took the fight to Demanto and Vinny. In the end, it was cheating by the Playas that made the difference… after Quest and Fear had planted Vinny into the mat with a double-team underhook suplex, Demanto pushed Fear into the referee, and while they were arguing, Demanto grabbed one of the opposition’s title belts and leveled Quest with it. Vinny covered Quest as the referee turned around and counted 1-2-3.

* The Commandos (former WWE developmental star “Too Cocky” Kevin Matthews & NWS Junior Heavyweight Champion “The Love Machine” Nicky Oceans, managed by Brittney Savage) defeated The Jock Mafia (Mike Dennis & Chris D’Andrea). The Jock Mafia showed why they are rising tag-team stars, giving The Commandos more opposition than they expected. But, like the last match, cheating ended up being the deciding factor, as after Matthews had been leveled with a flying clothesline, Oceans snuck in a pair of brass knuckles behind the referee’s back and knocked out his opponent. The referee turned around and saw Oceans making the cover and counted 1-2-3.

* The Nigerian Nightmares (with manager Voodoo Princess Sheeta) crushed Team Upstart (NWS Cruiserweight Champion Jumping Joey Janella & Ryan Rumble, with manager “Mr. Entertainment” J.D. Smoothie). With each member outweighing Janella and Rumble combined, The Nightmares had little difficulty in getting through their first round opposition, flattening Rumble with a Nigerian Leg Roll for the easy 1-2-3. Janella left the ring in frustration, kicking his manager Smoothie as he left.

In the second round of the tournament:

* The Nigerian Nightmares (with manager Voodoo Princess Sheeta) defeated The Cold-Hearted Playas (Danny Demanto & Vicious Vinny). Demanto was The Nightmares’ one-time mentor in 2009, and he tried to use that to convince them to “lay down” for him, but they would have no part of it. The match turned into a battle of the two most powerful teams in NWS. After Vicious Vinny fallway-slammed one Nightmare and bodyslammed the other, Demanto hit a moonsault from the top rope on them both, and it looked like The Nightmares’ undefeated streak was about to come to an end. But The Playas’ cheating in the first round came back to haunt them as Myke Quest and Corvis Fear came to ringside; Fear distracted Demanto and the referee while Quest clocked Vinny with his title belt. The stunned Vinny staggered into the center of the ring and was crushed by a Nigerian Sandwich, and pinned 1-2-3. The Nightmares advanced to the finals.

* The Commandos (former WWE developmental star “Too Cocky” Kevin Matthews & NWS Junior Heavyweight Champion “The Love Machine” Nicky Oceans, managed by Brittney Savage) defeated The BS Express. The match stayed even, and there was no winner when the bell sounded at the ten-minute time limit mark. As dictated by tournament rules, the five-minute sudden-death overtime period was started, and The Express held the advantage until Oceans clocked Express member Tom with a “Wet Floor” sign from the outside. Tom staggered right into a Matthews-Lock, and the referee rang the bell. The Commandos advanced to the finals to face The Nigerian Nightmares.

Former WWE Oddities member The Giant Silva won a handicap “Gullivers Travels” Match against Robert Pigeon & Sonny Boy Gulano & Tiger Man & Goat Boy (with “Mr. Entertainment” J.D. Smoothie as their manager). The goal was for Silva’s Lilliputian-sized opponents to pin Silva inside a giant fishnet. Each of Silva’s opponents tried to take him down individually, but being out-weighed more than three to one, they each were flattened by Silva. Eventually all four, plus Smoothie, ganged up on Silva and were actually able to topple him over the top rope. But Silva got to his feet and overpowered them all, and Smoothie’s charges gave up and left the ring, leaving Smoothie all by himself to get chokeslammed and (literally) carried away in the fishnet by Silva.

In the Finals of the Tournament:

* The Nigerian Nightmares (with manager Voodoo Princess Sheeta) defeated The Commandos (former WWE developmental star “Too Cocky” Kevin Matthews & NWS Junior Heavyweight Champion “The Love Machine” Nicky Oceans, managed by Brittney Savage) to become the 2010 J-Cup Tag-Team Tournament Champions. The Commandos came out first and then jumped The Nightmares as they came through the curtain. All four men brawled outside the ring, and when they finally got back to the ring, Matthews and Oceans kept the smaller Nightmare (the one who only weighs a little over 400 pounds) grounded for several minutes with repeated blows to the legs. But then Oceans missed a flying splash, the larger Nightmare tagged in and cleaned house on both Oceans and Matthews, and not even an attempted distraction by Brittney could deter The Nightmares, as they crushed Matthews in the corner with a double avalanche. Oceans attempted to bring the ring bell hammer into the ring, but The Nightmares caught him, and flattened him with a Nigerian Leg Roll and pinned him 1-2-3 to win the match and tournament.

Captain Lou’s niece Kami Albano came into the ring to award the trophy to The Nightmares, and a moment of silence was held in memory of Captain Lou.